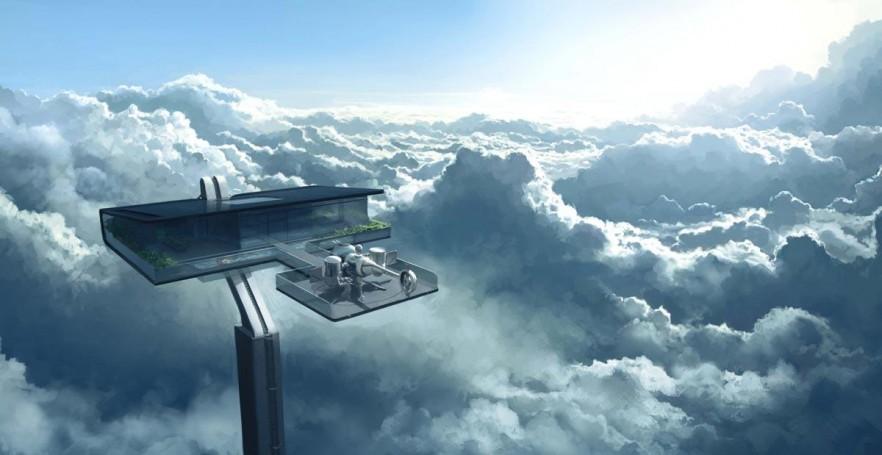 The creators of the science fiction movie Oblivion have imagined a future where humans have escaped the Earth to lunar colonies, and a few left behind hover above it in Skytower, a residence, command center and heliport 3,000 feet up.

A recent sci-fi movie grabbed our attention with its futuristic glance. It represents the near future where humans have abandoned the Earth because of a war with aliens. In this imaginary world there are only few left on Earth. They occupy a Skytower, a residence, command center and a heliport, all 3 000 feet above the ground level.

The first human building is the Skytower – a true futuristic construction with clean lines that is situated up in the atmosphere. It is something like an escape from the overcrowded cities nowadays, or at least it recreates a counterpoint to this lifestyle. Darren Gilford is the production designer whose inspiration came from the midcentury modern past home interior design.

When you first look at the place you get the impression of an elegant futuristic minimalist design. Clean and elegant designer lines wrap the buildings and create a sense for progress. And Gilford did that in a fascinating way.

Useless to say, the color scheme of the Skytower follows the sky palette that surrounds the place – white, light gray and blue are the main theme for the building. 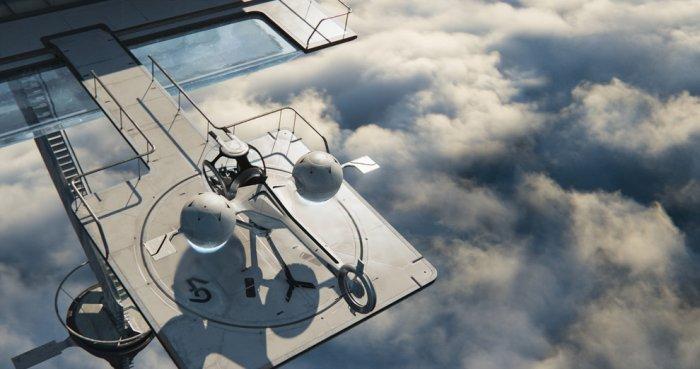 Jack Harper (Tom Cruise) is a technician from the future whose job is to fix drones that are programmed to find and eliminate aliens.

There is not much to be said about Jack. When he visits the ruined Earth he finds different objects that remind him of the good old times. He keeps them in a sacred place near a lake – his own small house distinguishing in style from the ultra futuristic environment above.

Tom Cruise’s best friend and partner in the movie is the Bubbleship – a hybrid that gets its appearance form its prototype – the Bell 47 helicopter. On this image you can see it parked at the Skytower 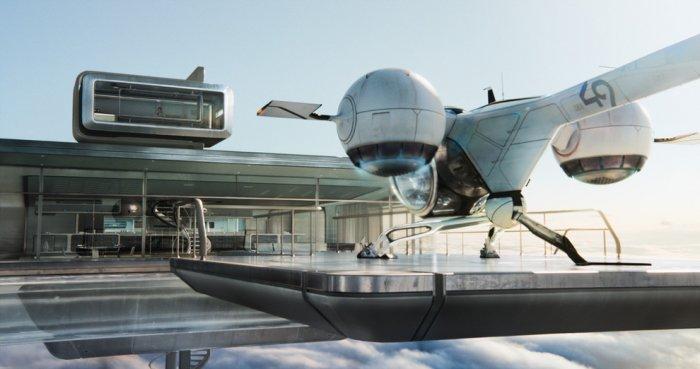 The Skytower’s interior design is created in order to reflect the sunshine and the color mood coming form the outside. Huge windows let the desired amount of light and create an unique atmosphere that combined with the pale and bright colors inside draw an almost sterile environment.

The vertical organization of spaces has its own symbolical meaning. After the apocalyptic events on Earth everything on the ground left ruined. On the other hand, the areas up in the sky represent the new beginning. Thus, they need to be pure and white and simplicity play the key role at creating the meanings of what is “above”.

In the midcentury modern architecture there are some very common techniques that the production designers took advantage of. One of them is using cantilevers as a balancing element of the 3 000 line connecting the Skytower with the Earth. 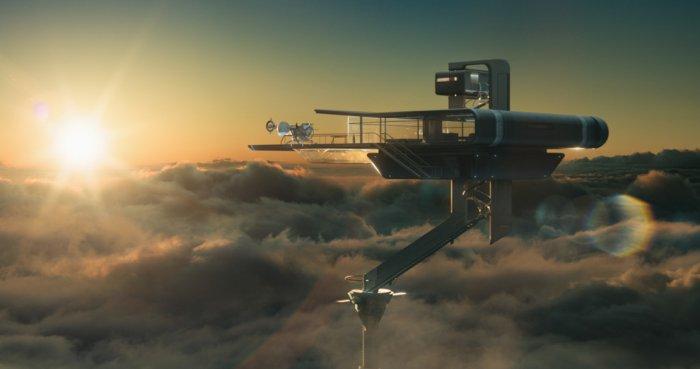 This imaginary future world was a really hard task for the team that had to create how it would look like. Nevertheless, they formed a concept around the minimalist designer lines with several curved elements like the corners, for example. Inside the living areas there are a lot of spherical connection points. Another spherical design element is the pilot boot in the Bubbleship. 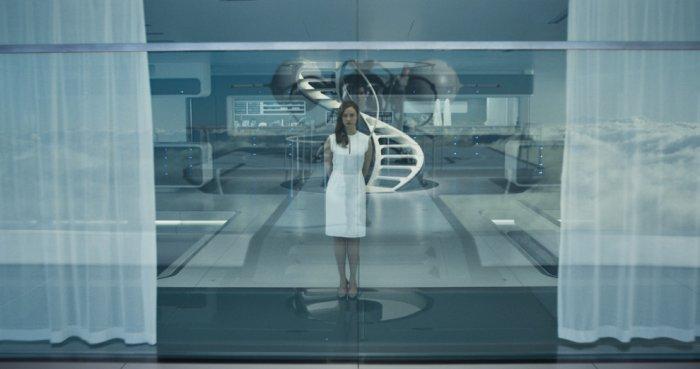 Gilford outlines that the interior design of the Skytower is not only simple, elegant with minimalist appearance, but it is also a very functional place. Everything is placed with purposed in order to sustain the usual life of the human beings. 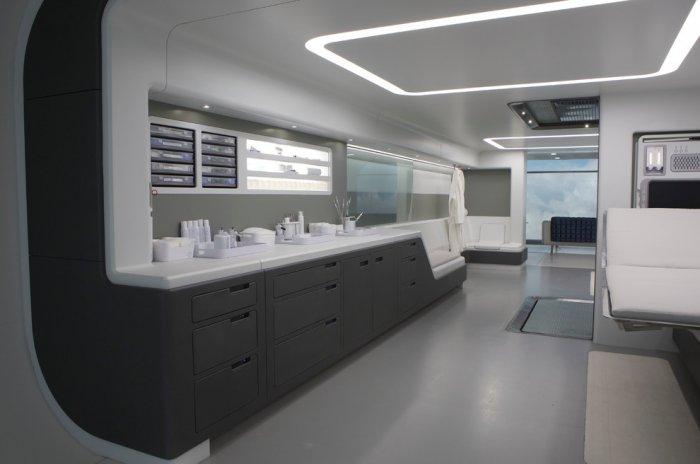 When we look inside the living space, we will definitely be attracted by the strong and remarkable shade of the spiral staircase that connects the different levels. One can access his preferred destination by reaching the staircase and moving through the circle openings when passing the floors. 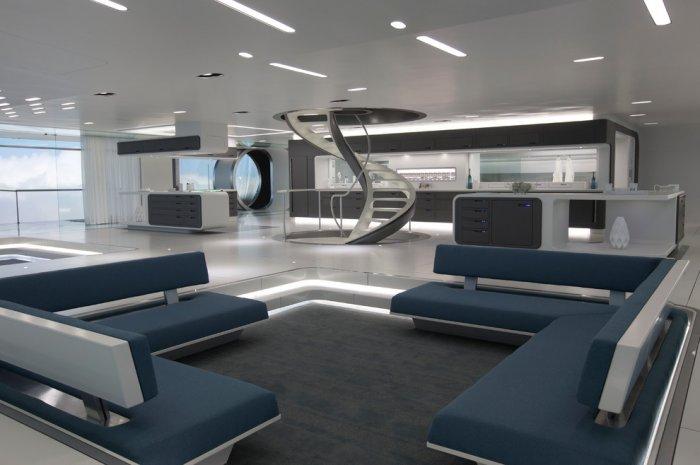 Simple geometric shapes and gorgeous small details – these are the main values that have driven the project to a level of perfection. 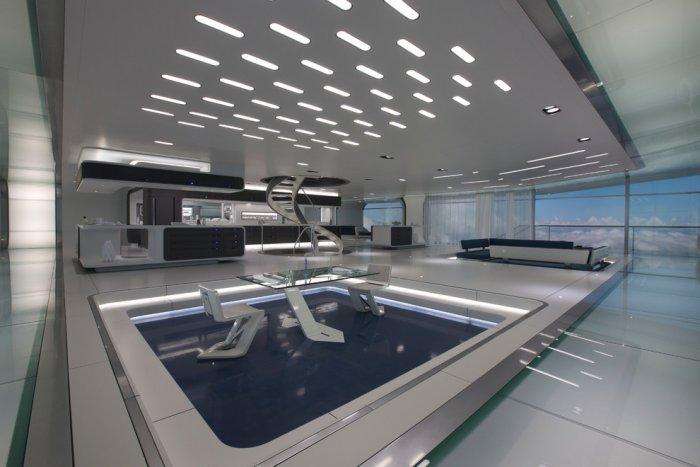 Another contrast setting is the colony of survivors in Raven Rock. There live a small group of humans that could escape from the alien invasion. The scene is filmed in an old and rusty power plant in Louisiana. The atmosphere is in a complete contrast with the clean and sterile interior of the Skytower. 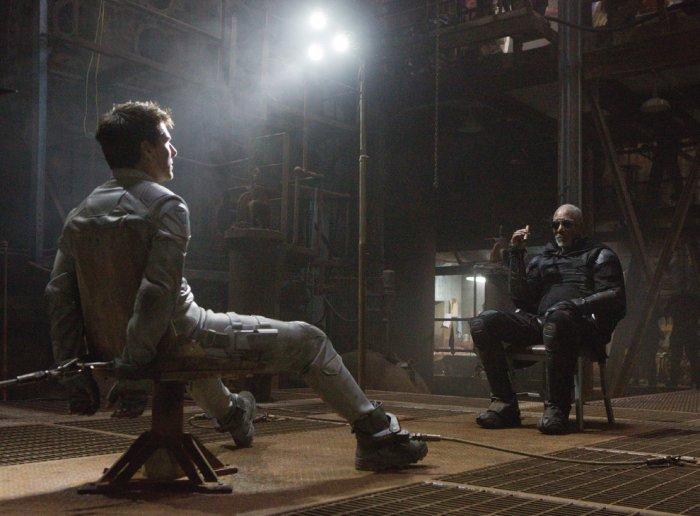 Watch the trailer in order to observe the whole futuristic concept.

When creating the buildings for “Oblivion” the producers team took their inspiration from a famous photography called “Visual Acoustics: The Modernism of Julius Shulman“. What they found in the 50s productions was the vertical lines, used also in the futuristic drama, that appear very clean in every composition. 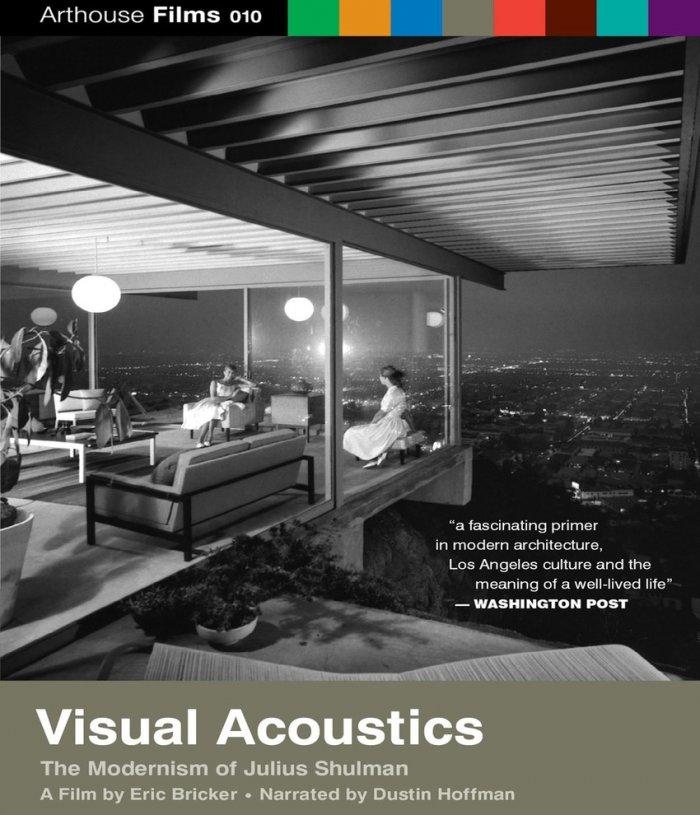 Another inspiration work for creating the Skytower is the Mies van der Rohe‘s Edith Farnsworth House. The contemporary house stands above the ground in the forest and it looks like it “floats” in the air. Here, we can spot the skilful use of clean vertical alignments in combination with pure vertical lines. 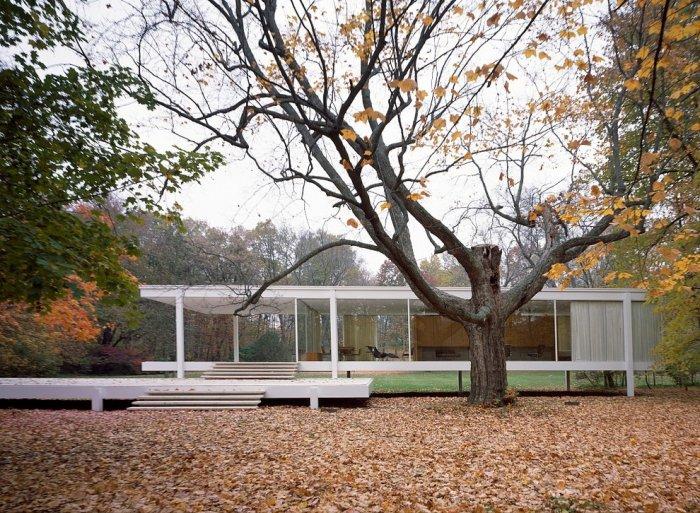 The idea of clear views over the boundless sky and the “heavenly” atmosphere came from one of the most famous works of John Lautner. The architect build his project in Southern California and it stands out as iconical creation nowadays. The breath-taking views over the city is a scenery that provokes one’s mind to dream and generate fantastic ideas. We can find some of them at “Oblivion”. 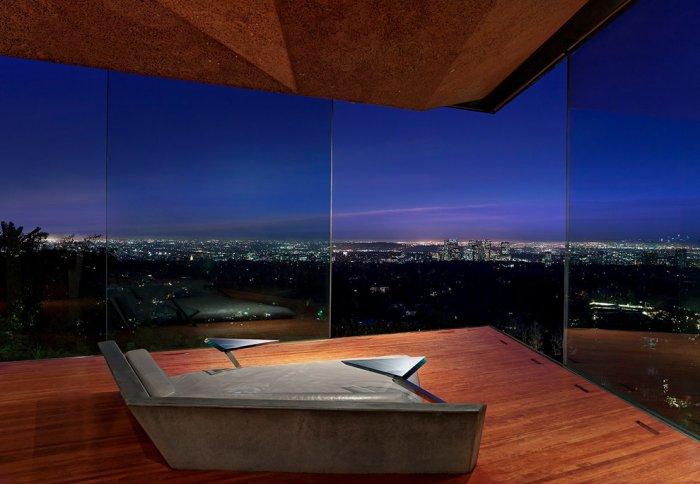 This modern and stylish home created by Mark Dziewulski is a construction that floats over the water. Do you find any similarities with the Skytower that hovers over the sky? 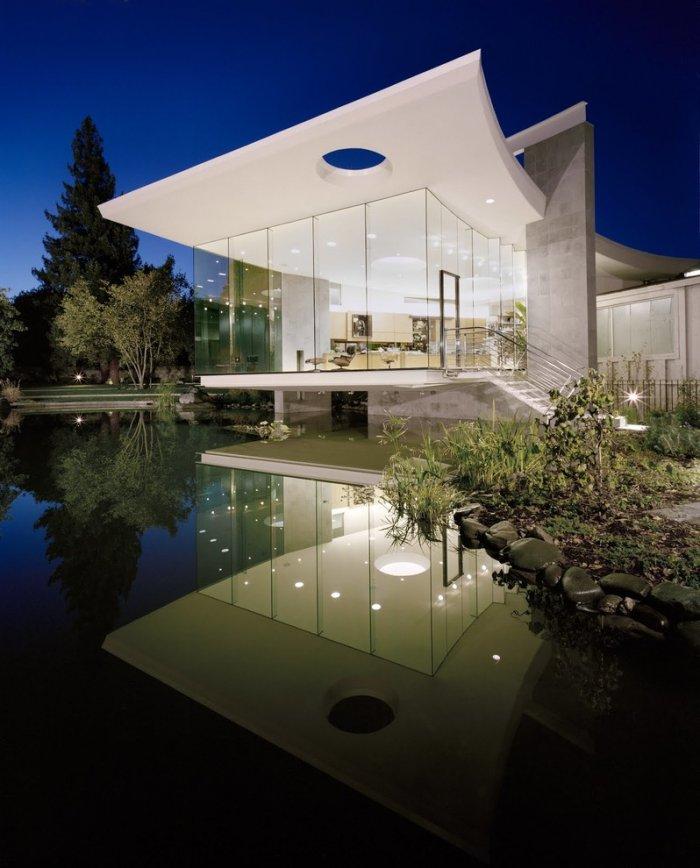 Another great detail in the movie is the futuristic furniture, selected for the scenes. In 1963 Eero Aarnio somehow predicted what the future will look like and created his famous Bubble Chair. Now, you can see how it perfectly matches the rest of the interior in the futuristic setting. 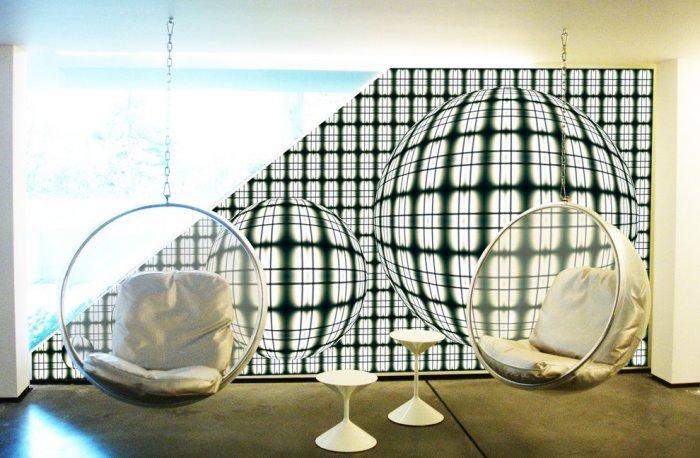 Have you thought about softening the raw appeal of a minimalist bathroom? This is possible by using certain techniques and one of them is placing big curves, for example. 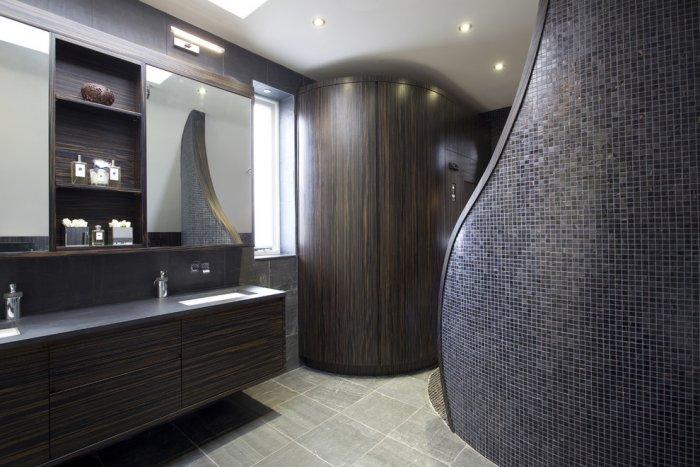 The modern times architects used the spiral staircases as a focal point in their works. A futuristic interpretation of this method is here in “Oblivion”. And it stands just in the right place! 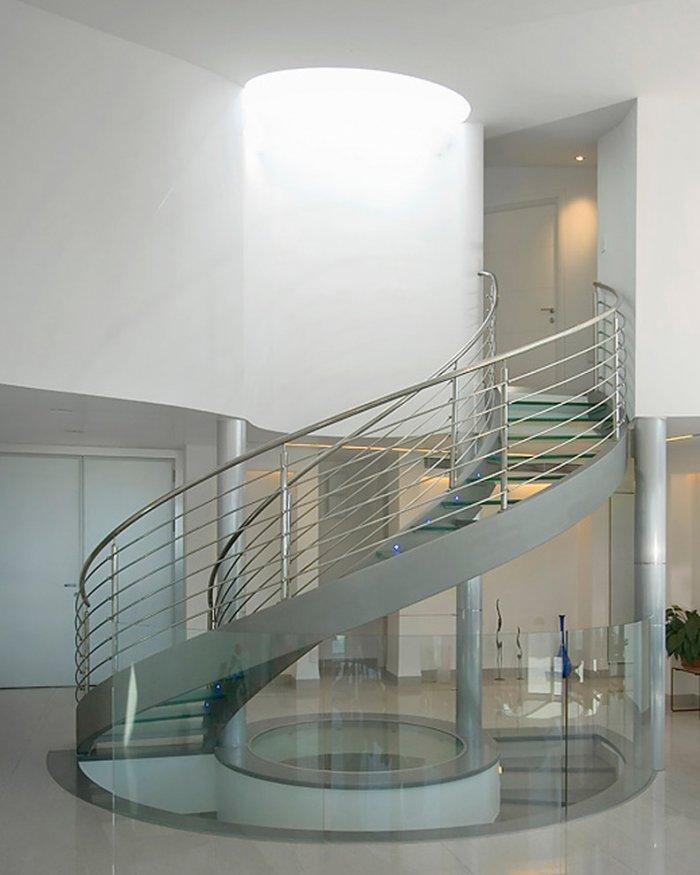 The chairs at the dinner table in “Oblivion” are a true copy of the famous Gerrit Rietveld‘s Zig Zag Chair created in 1943. 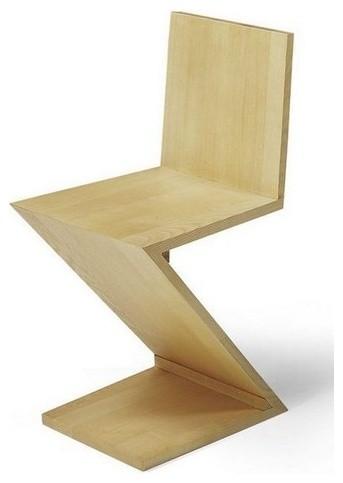 A great interpretation of how the future will look like takes place in the following home. The interior design of the place doesn’t follow the strict white and sterile ambiance of the typical future house. This place has an industrial appeal that cracks the usual concepts. Jenson Architects‘ work is a construction made from recycled materials. 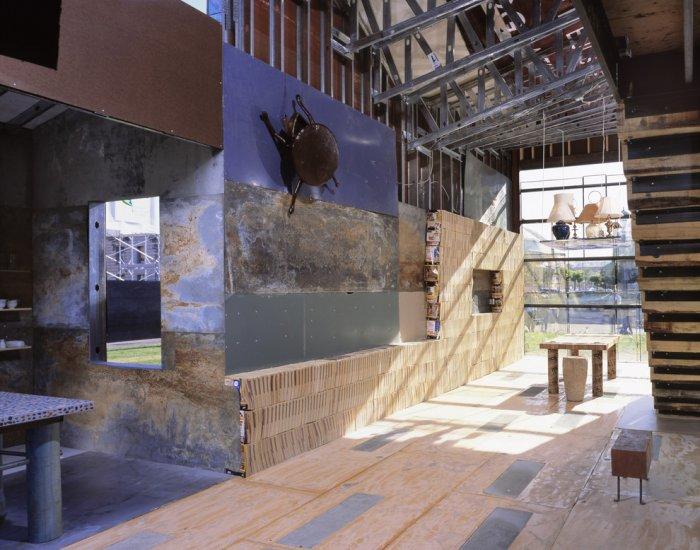 This image shows us that the production designer Darren Gilford is a true fan of midcentury modern lifestyle and especially Herman Miller’s one. The setting in the Skytower truly borrows some of Miller’s furniture design ideas. 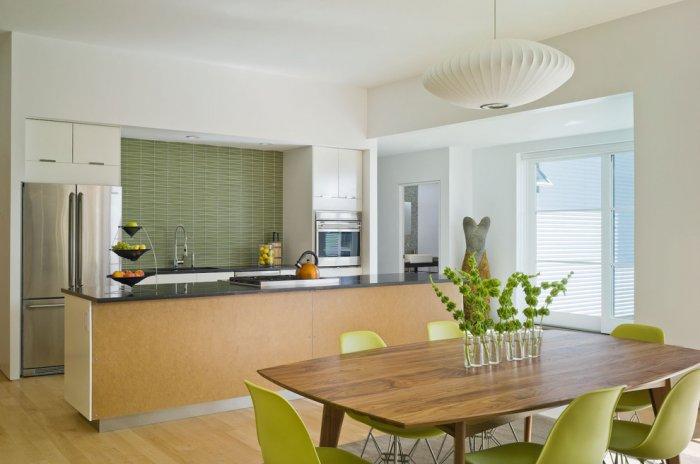 Time For Renovations? Customize Your Living Space With Technology

Spread the loveDid you know that more than 25% of homeowners prioritize smart technology when r ...

Spread the loveA water heater is an essential element in any house. There are various scenarios ...

How to Decorate a Classic and Modern Look Kitchen

Spread the loveDecorating your home can be such a hard thing to do, from all the designs and it ...