HomeDesignArchitectureMinimalist Interior and Exterior of a House in Ari ... 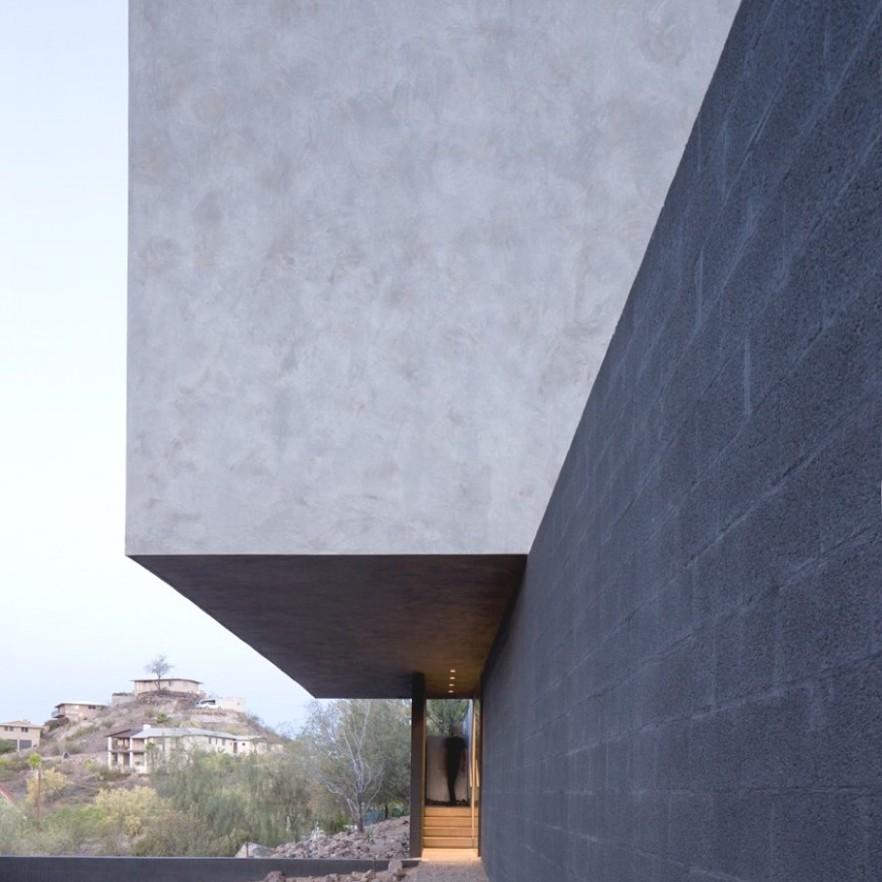 Minimalist in its purest. This is how we can describe both the interior design and the architectural project of this 2 500 square feet house, located in Phoenix, US. The building has been constructed in the beginning of the 90s by the famous architect Wendell Burnette. Not surprisingly the project was rewarded a prestigious Progressive Architecture Awards in the late 90s. A simple renovation has been made in 2010 by the original author of this masterpiece, Mr. Burnette itself. Now the astonishing minimalist house consists of 3 bedrooms and 3 bathrooms. 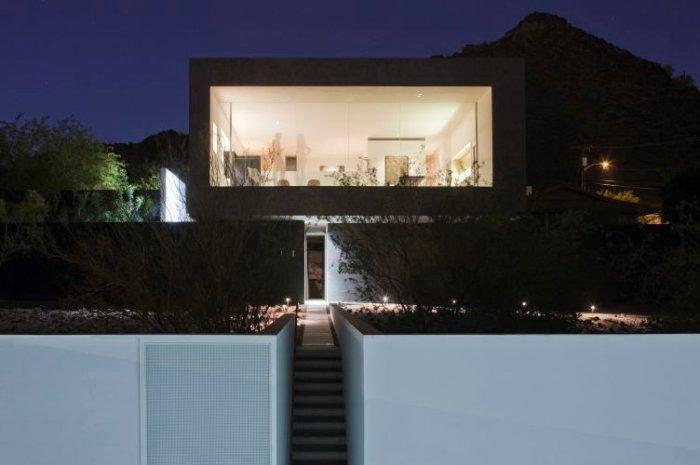 The neighborhood, where the house is located has some not very impressive houses that have been constructed during the 50s and 60s. The base of the Echo Mountain is not the typical places for such kind of property, but this minimalist jewel breaks the rules. It has two story that accommodate all the functional areas, except for the outdoors swimming pool which from this point of view, can be found at the level of eyes, perfectly matching the ground level. If you are inside the house and more specifically on the second floor, the giant window facade will reveal a fascinating game of silhouette coming from the distant horizon of Phoenix and Sierra Estrella mountain range.

The view that you can see from the image above is from the living area and the terrace. In the distance behind Phoenix’s lights create e spectacular show. A swimming pool stands with its own attraction speechless in front of the marvelous horizon. Here you are able to see the virtual dialog between the house and the pool.The tall walls have a double function. First of all, they provide enough privacy from the curious eyes in the neighborhood and secondly, they put the accent on the boundless sky above. 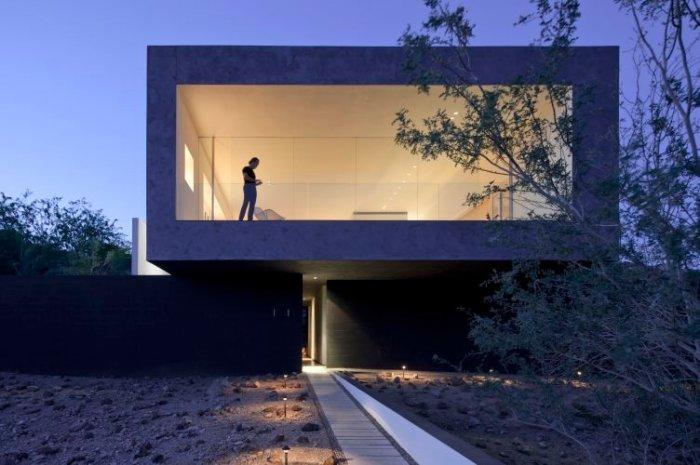 In fact, the house of the architect is also located nearby, at the other side of the mountain. The two houses follow one and the same designer concept – two parallel concrete-block walls with glazed ends. The glass facade reveals the ultra-modern minimalist interior of the contemporary home. A small courtyard, that is situated behind the wall on the left hands side seen from here, is also included in the plan of the construction. 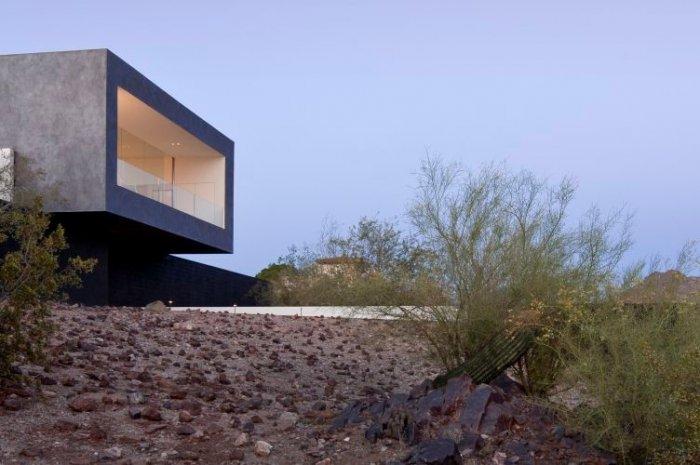 Originally the house was built with stucco interior but in 2010 when the new homeowners took possession of the place, they found that the existing style was outdated. They immediately decided to replace it. Burnette started working on the task and made the stucco design more darker than it used to be. The effect he ahieved is mottled and it looks very similar to the surrounding desert like soil. 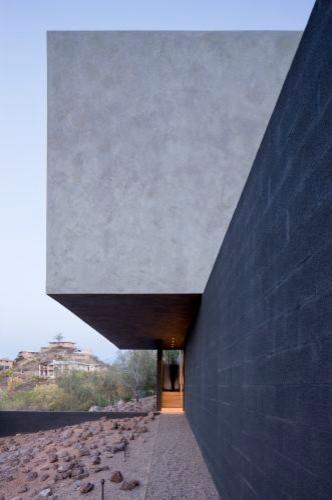 One of the remarkable aspects in the architecture of his house is the way Burnette used the walls to define the outdoor functional spaces and ahieve a visual blend between the interior and the exterior. There are several different heights, according to the different areas of the construction. Now, we are looking at the two-storey rectangular plan and the exterior stair that leads to the yard at the back of the house. 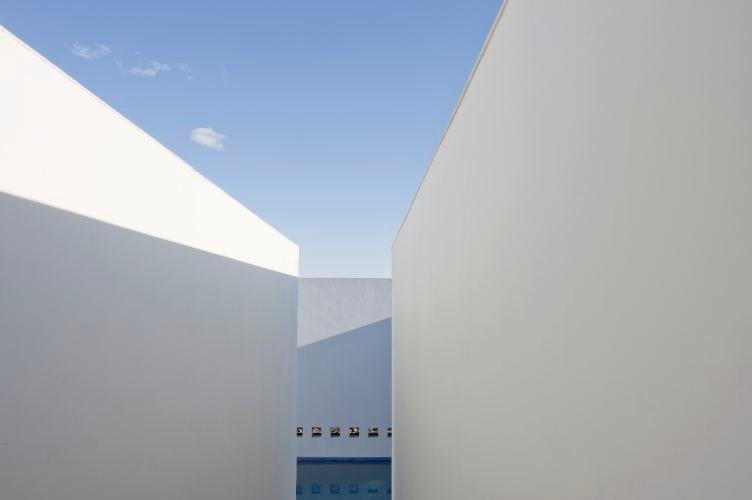 By the pool one can get the strongest minimalist impassion of a house. Do you see the small squares that are positioned a few feet above the water level? These are cuts into the walls just above the grade. They function as an additional source of light for the separated from the other functional areas swimming pool. During the day, they allow the divine sun light to come and warm everything inside the pool, while at night, the square cuts let the romantic shine of the city draw picturesque shades on the opposite wall.

The interior has been kept simple, stylish and elegant and it sets a definite minimalist look of the entire place. The open plan design allows a lot of natural light to fill the entire house. From this point of view, we can see the gorgeous living room with comfortable sofas and stylish designer wood chairs, and the entrance to the courtyard, situated on the west side of the house. The master bedroom is situated behind the wall on your right hand side. 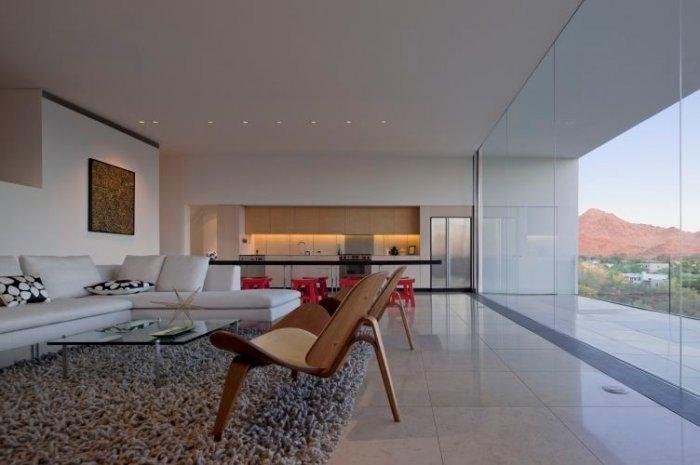 From this perspective we can see the spacious open plan living room with the impressive minimalist interior design of the transitional area to the kitchen. On the left is the master bedroom and the mater bath. On the right hand side, it is the fascinating giant windows facade that allows us to explore the landscape in front of the house and dream about our most sincere wishes. The view is breath-taking.

Spread the loveHave you been looking around your master bedroom yearning to make a decor change ...