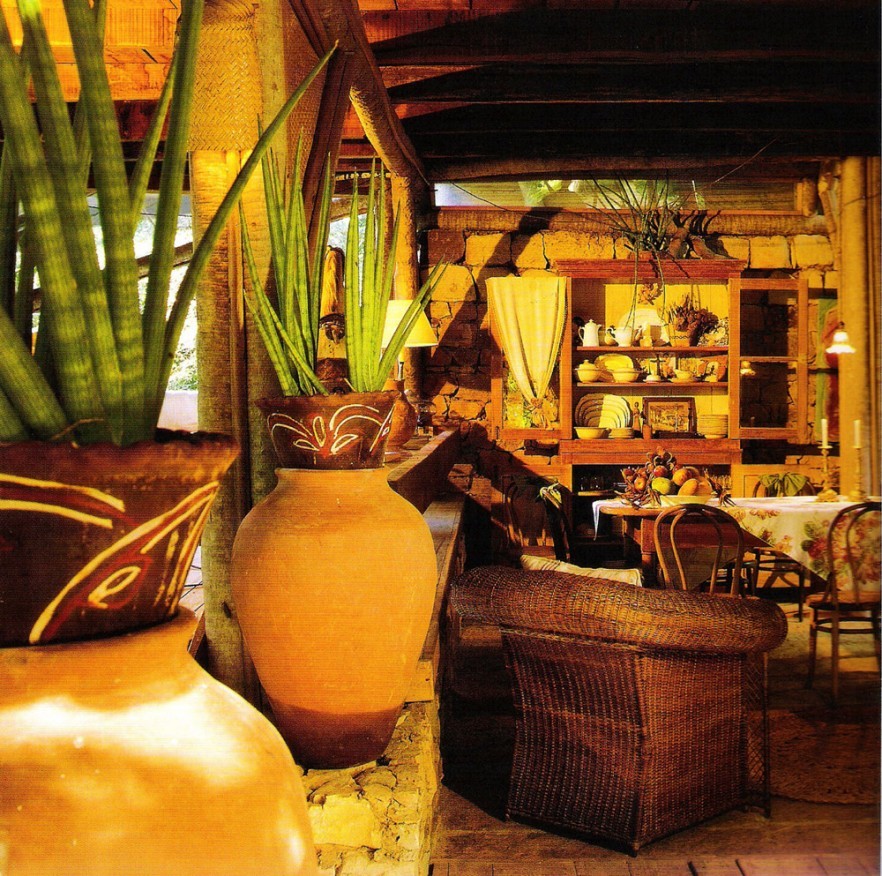 Constructed of indigenous palm and stone, architect Gerson Castelo Branco’s Ceara Province. Its rooms open to the forest and resonate with the sounds of water

It is my “Paraqueira Brasileira”, my paradise,’ says architect Gerson Castelo Branco of his year-round home, located in the jungles of Brazil’s Ceara Province near Vicosa. The Capibaribe River runs through the eighty-acre property and is enlivened by no fewer than seven waterfalls. ‘Both the river and the forest attract particular birds and wildlife to the site because it’s really their habitat,’ says Branco. ‘My area is a forest preserve, and I don’t allow hunting, so the animals favour it because they feel safe here.’

In harmony with the wildlife, Branco’s home is also at one with the physical elements at an altitude of two thousand feet on the plateau of the Ibiapaba Sierra. ‘I put the house on the highest place of the site so it would be possible to see the first waterfall,’ he says. ‘But I preserved some distance to the fall because of the excessive moisture and noise of the rushing water during the rainy season. The water’s sound is always present in the house, but it’s very quiet.’

Slender cane-like sticks arranged in rows cover the ceilings and some of the walls. Floors are of slate or rough-cut planks covered with straw matting. The house is a small compound composed of two structures: a main house of three storeys with a jutting triangulated roof; a smaller structure of two storeys located a few steps up from the main house’s ground floor; and a covered porch between the two. Branco takes breakfast and lunch on the porch, where he can be with the birds and wild

The double-height interior of the main house is a lofty space revealing the ground- and first-floor living areas with hammocks and day-beds for lounging. A central staircase curves upwards to the first-floor sleeping quarters, which are draped, four-poster chambers called camarinhas,.; almost like desert campaign tents. Branco’s master bedroom is also on the first floor. It is a spacious open area with an ample observation deck from which the architect can listen to the nearest waterfall. ‘The forest and the first waterfall are seen here as well as through the glass panels of every opening of the house,’ he says. ‘The house is all transparent to the river.’ Branco’s house is site-specific and works well with the regional climate and ecological concerns.

‘I want my houses to show that it is possible to live in a unique way,’ he says. While Brazilian modernists Roberto Burle-Marx and Oscar Niemeyer produced hard-edged, geometric structures of concrete and steel, Branco prefers the ‘native’ style of palm wood-and-stone houses, made from the natural resources of the country.

‘This house isn’t a weekend house; it’s my home,’ says Branco. The architect often works here, though he also keeps an office in Ceara s capital city of Fortaleza. ‘I stay here for long seasons when the clients permit it, of course. However, Brazil is a big place, and my architectural work takes me to many regions. But I am forever happy when returning to my paradise.’ 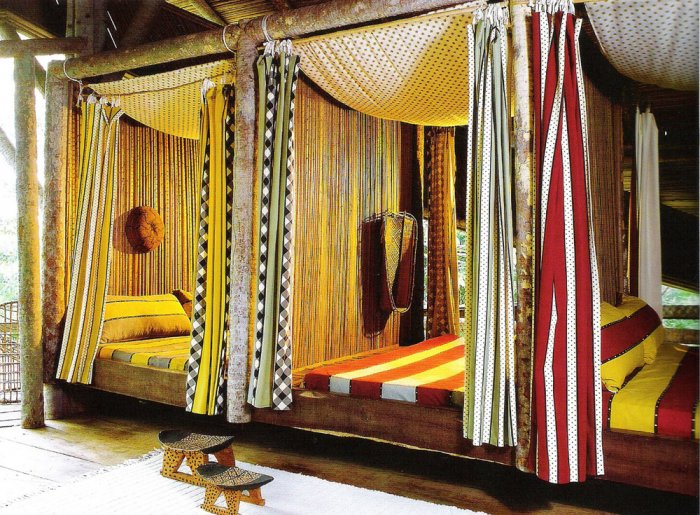 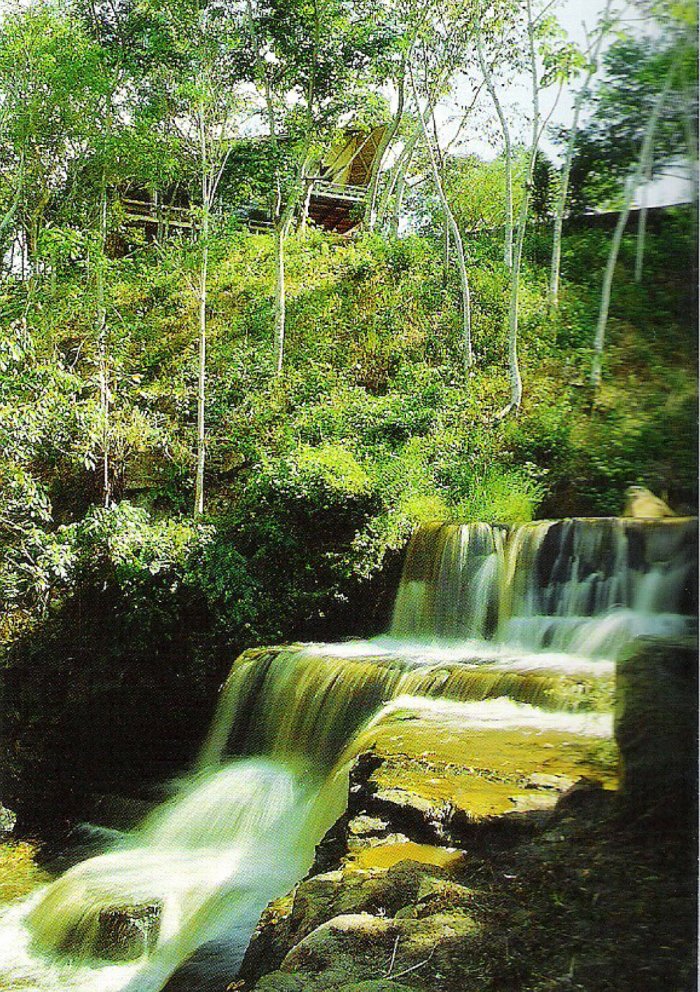 Branco’s home is on one of the highest points of the plateau of the Ibiapaba Sierra. ‘I preserved some distance to the fall because of the excessive moisture and noise of the rushing water during the rainy season,’ he says. 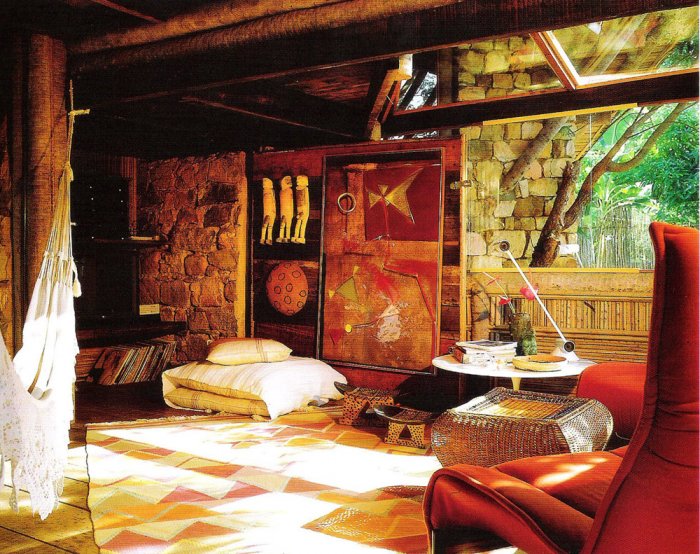 An alcove for watching television, located in the first-floor living-room, gives the feeling of a tree house with its view to the palms, hammock and treetops. 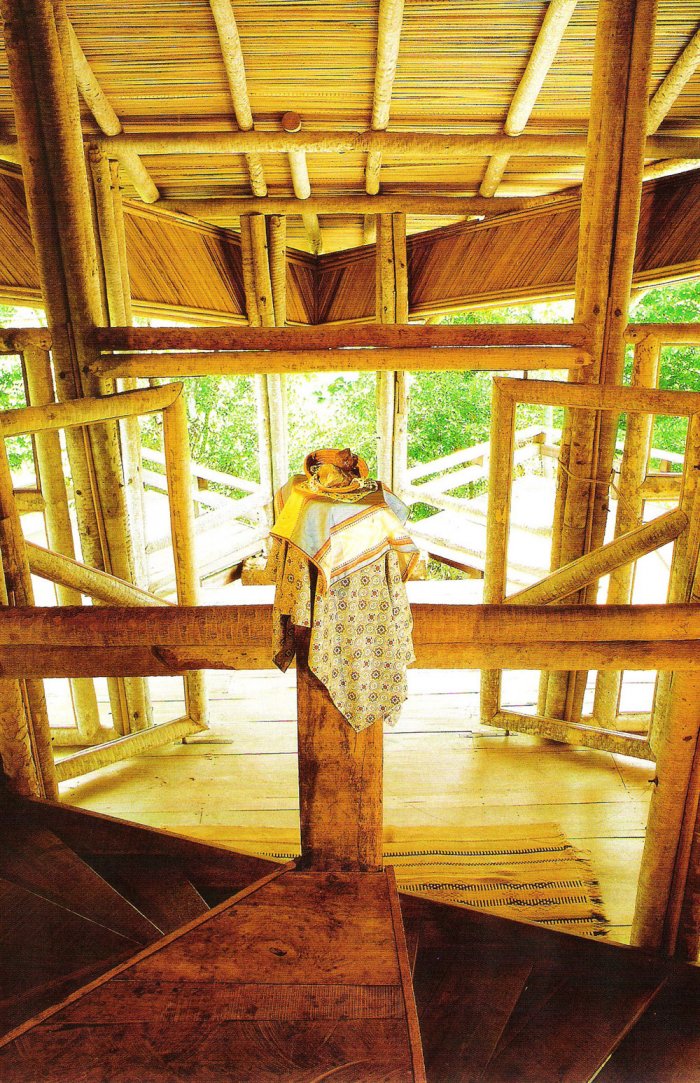 A crystal is placed at the exact centre of the main pavilion, on the post of the first-storey landing. The jutting triangulated roof creates the soaring space of the double-height interior. Large double door frames open to a pair of terraces. Floors are of wooden planks. 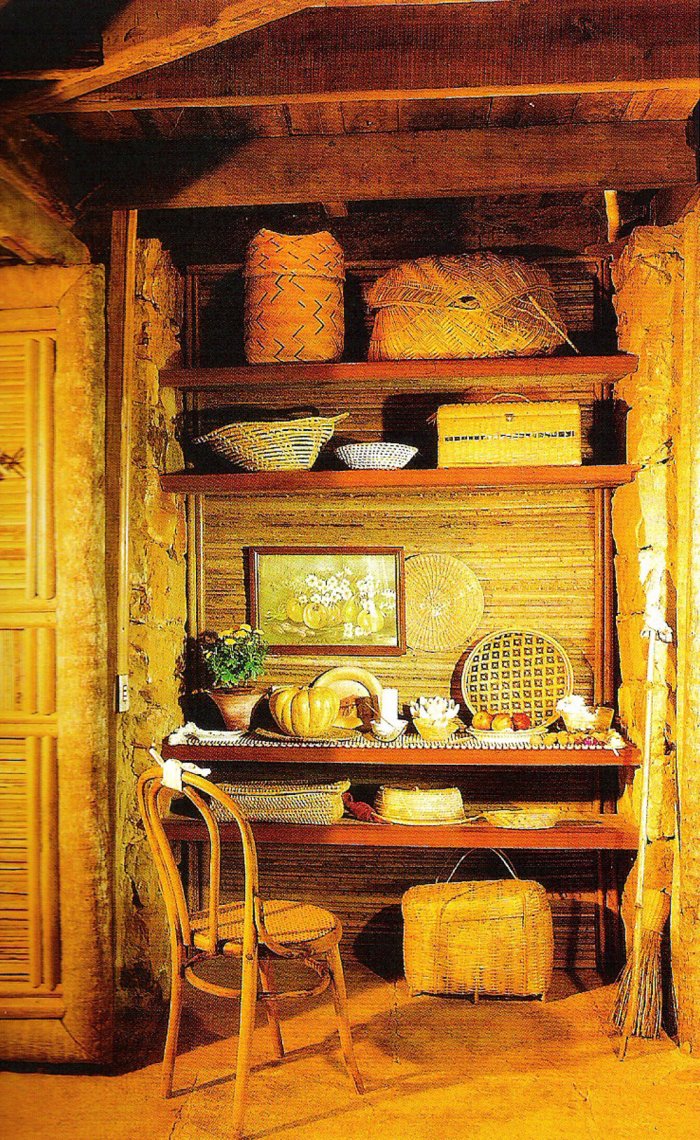 Indigenous palm stems and fronds were woven and crafted to create structural and decorative objects throughout the house. Walls and doors made of palm stems surround a built-in desk and shelves with baskets in the master suite. 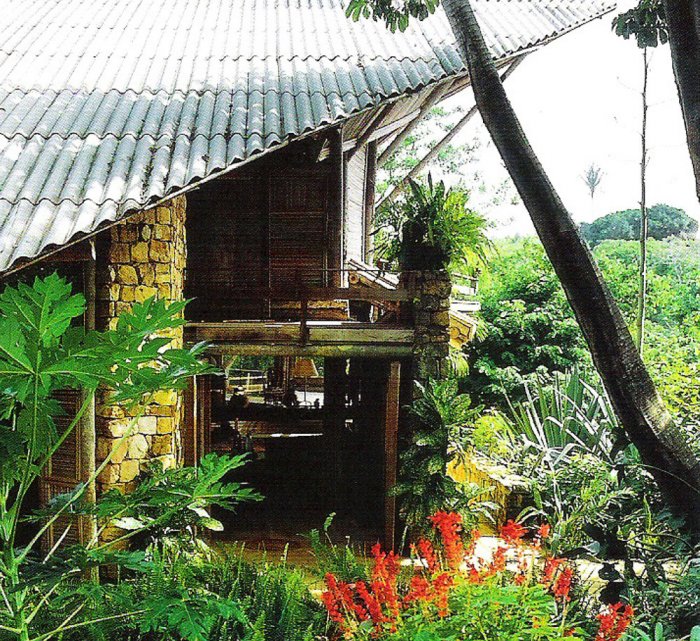 The two- storey structure under the triangulated roof holds the home office, kitchen and servants’ quarters. Stone piers and the palm-trunk frame create a shaded porch under the terrace. 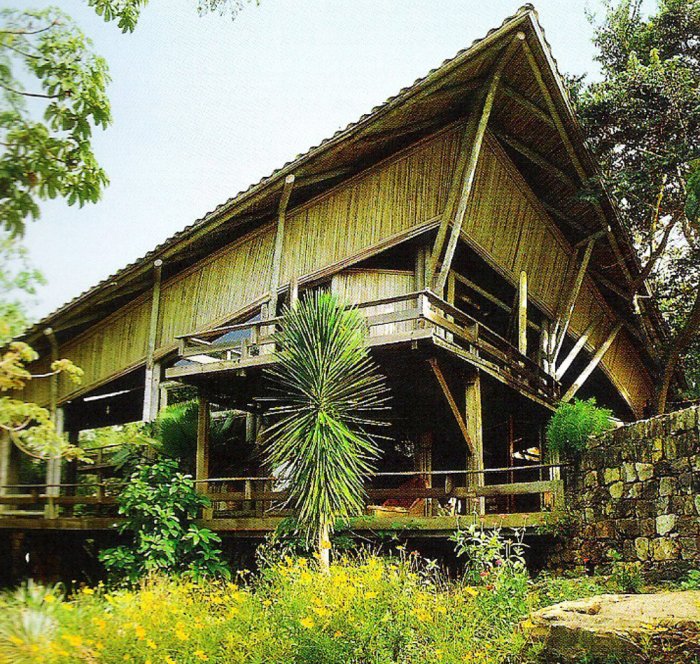 The angled roof over the main structure shows a broad panel of palm stems to shade and enclose the upper- storey master bedroom. Along the ground-floor living-room is a wood-rail terrace pointing out towards the forest and the sounds of the nearest waterfall. 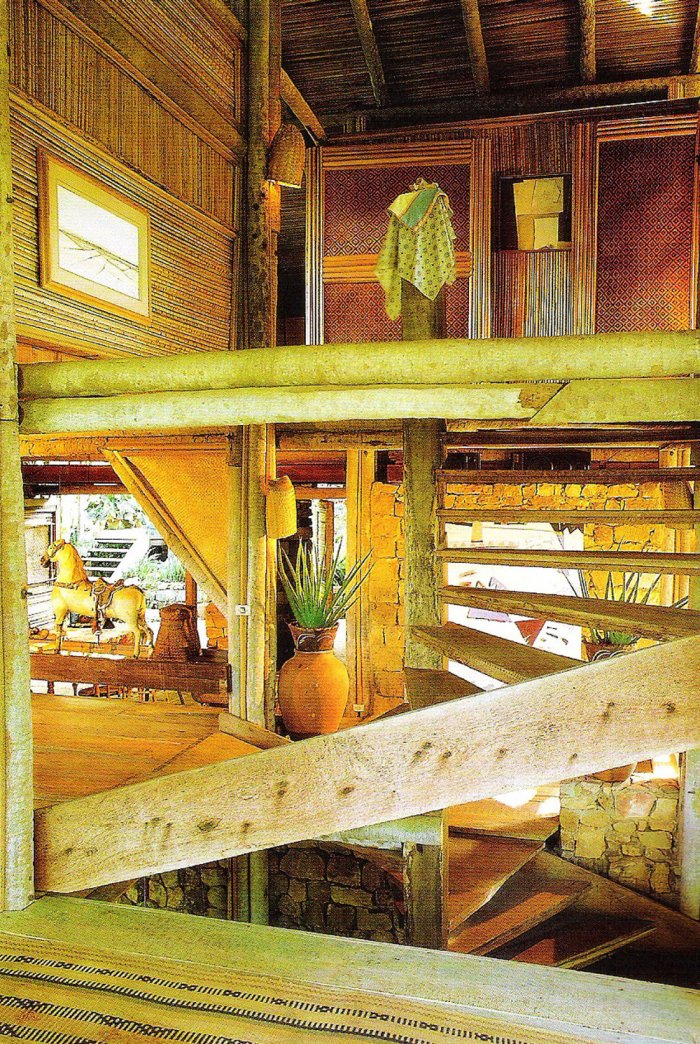 Interior and exterior spaces are intertwined, and the central spiral staircase shows the transparent frame of the house through which another stair located on the far wall of the ground floor, left, leads outdoors.