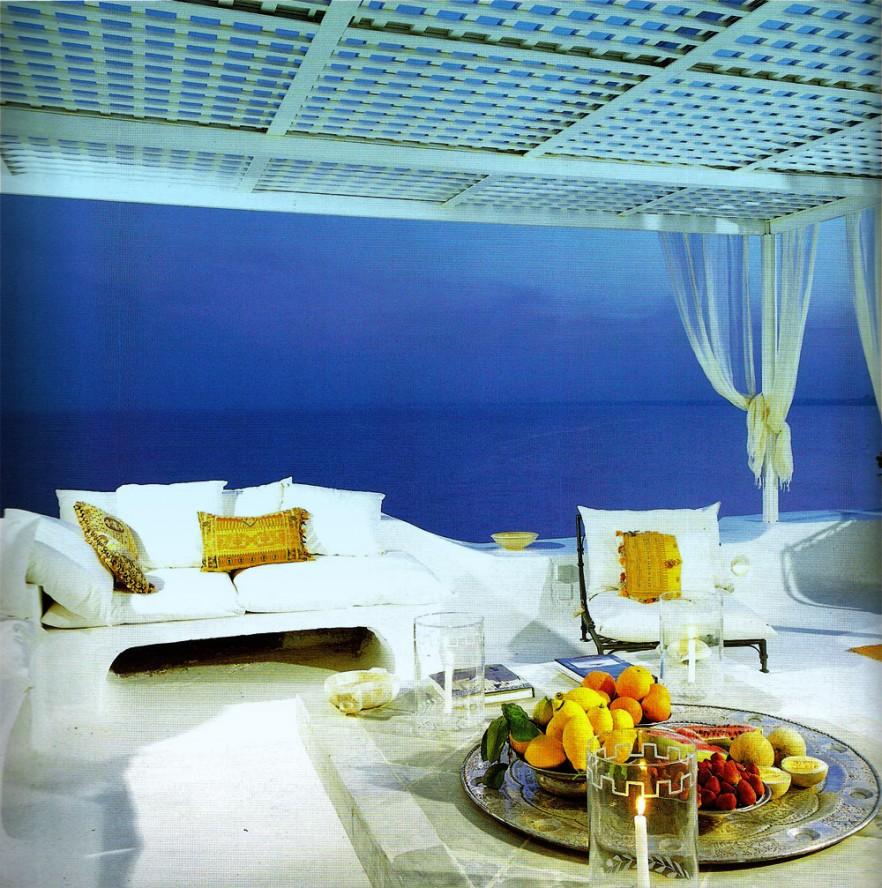 Interior designer Giorgio Pes renovated and decorated his Tunisian medina residence in pure Mediterranean white, mixing Arab and Roman elements and motifs, and turning its roof terrace into an outdoor living- and dining-room.

Restored and renovated, a Tunisian seaside villa maintains all the traditional characteristics of local Arab architecture while offering an immersion in the Classical world. Giorgio Pes, a Rome-based interior designer, has made a mix of ancient Roman and Arab motifs into a magical white-on-white eyrie overlooking the blue sea.
Narrow streets lead to the house, which is meshed in amongst other boxy white vernacular structures at land’s edge between town and sea. Like the typical Arab house, the whitewashed residence appears closed from the outside, with small windows, few doors and antique wood and metal detailing painted the traditional powder-blue.
Tunisia has played host to a multitiude of cultural traditions. Hammamet, on the north-east coast, is a beach town with a medina, or old quarter, built within its ancient ramparts. Pes, who was able to obtain precise and accurate work from the talented local craftsmen, embellished the house with seductive Arab and Roman fragments. Statues, bronzes, terracottas and decorative motifs reveal the designer’s predilection for the Neoclassical style.
The so-called skita inside the entrance door is a small room which separates the outdoors from the domestic interior. The Antique presence of Tunisia is felt in this
tiny space. A fish in the ancient mosaic paving represents the seaside location and good luck.
From the skita a Tunisian patterned wood door leads up stone stairs to the grand salon overlooking the sea. The room appears quite broad, with sheer glazed windows opening one entire side to the view. Only a grand Roman-arched fireplace, framing stone columns and swags of gathered white drapery impinge on the breadth of this vista. These design elements make the sea – as natural as it is – appear as if it is part of a grand theatre set. The sea is also visible from the dining-room. A pair of fluted Doric columns lead into this space, whose walls and rug are dominated by Tunisian geometric patterns.
The terrace becomes an outdoor living- and dining-room with white latticework overhead and at the sides. The white canvas draperies gathered in the comers can enclose the space like an Arab tent in bad weather or if the evenings are cool. However, in Hammamet’s protected gulf, the harsh edges of the Mediterranean climate are much diminished.
Pes’s reputation as an antiquarian and restorer sometimes obscures his background as a set designer for the cinema industry. But this aspect is clear at Hammamet, where he has glamorized a typical Arab house and captured a dramatic view of the sea. 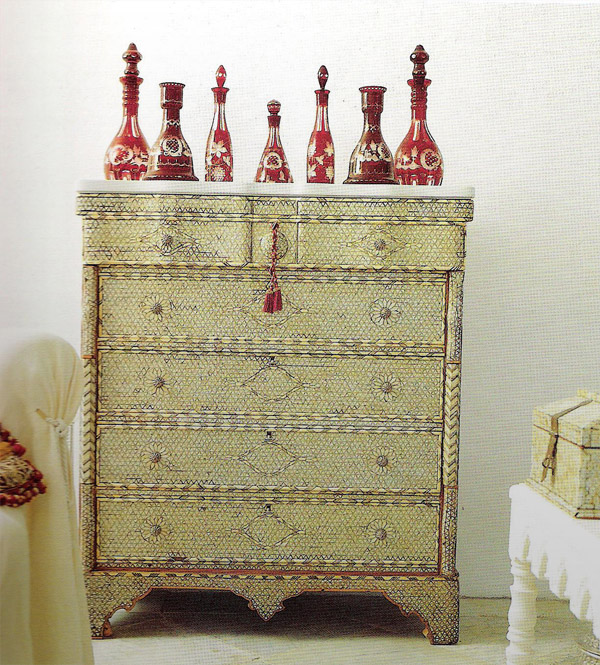