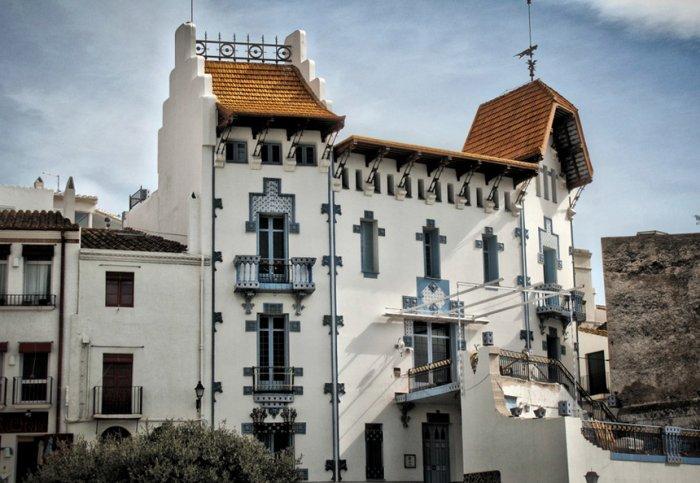 Blava, the port area of Cadaques in Spain, is one of the best preserved and most typical fishing villages along the northern coast of the Mediterranean near the French border. Bougainvillaea and oleander are interspersed amongst the port’s steep, narrow streets, which rise up from the waterside. White houses and apartments are available to rent, since the town offers no large hotels. On the corners and along the promenades, there are cafes and bars which are called ‘cellars’ since they were the local wineries until the nineteenth century.

Cadaques lies on the peninsula of Cape Creus, on a slope looking out to a bay, part of a rugged stretch of coast interspersed with coves called the Costa Brava.

The area is rich in fish and shellfish with warm, humid weather nearly year-round. Its landscape includes shades of silvery green from the olive trees and the silvery blue from the endless horizon of the sea. Inland are forests, meadows and villages surrounded by agricultural lands, whilst seaside settlements remain small and quaint.

Casa Blava at the Catalan port has an Art Nouveau architecture design appearance. Geometric blue tilework distinguishes the house’s windows and terrace railings, which are painted powder blue to match the tiles. The four-storey fagade is quite symmetrical, but two wings vary in the shapes of their steep roofs and small attic windows. Placed between these windows are unique metal braces which extend from the roof beams to corbels. The house’s roofs and corbeled eaves reflect medieval influence.

On the piano nobile, the central entrance door is crowned by exquisitely patterned blue-and-cream tiles,
and stairs lead over a ground-floor passageway and down a short flight to the main terrace. Defined by an ornate metal-and-tile railing, the terrace is actually located on the roof of Casa Blava’s boathouse with angled doors and windows only feet away from the water.

The interiors of the high-eeilinged piano nobile also appear to date from an earlier era. Gleaming wooden floors and the resident’s nineteenth-century-style furnishings maintain the sense of Old-World charm.

Cadaques has Greek and Roman archaeological sites, and the ideals of ancient Rome were assimilated into Catalan culture, thus helping the country to survive the barbarian invasions which followed the Empire’s collapse. Following the period of Muslim domination,

Spain continued to develop a unique culture incorporating elements of both Islamic and classical civilization. In modern times, Cadaques was appreciated for its nonconformity and was ‘discovered’ by painters, artists and intellectuals who chose it for their residences. Salvador Dali was born nearby at Figueres and spent much of his time at this fishing village when Cadaques became a centre for the avant-garde.

Local museums and galleries still embrace that reputation and count among Cadaques’s famous past visitors the artists Picasso, Max Ernst, Marcel Duchamp, Rene Magritte and David Hockney, as well as composer John Cage. Albert Einstein also vacationed here and would use his free time to play his violin. Today, the Museum of Graphic Arts and the Arts Museum show works of local artists, and each August the port features an international music festival.

DIY Asbestos Removal: Why You Shouldn’t Do It

Why Get Vinyl Flooring in New Jersey?

Homeowners have strived for years to transform their house in New Jersey into a home where they ...

4 THINGS YOU SHOULD CONSIDER WHEN BUYING OUTDOOR AWNINGS

Sitting on your patio or in your backyard with your family or friends catching up on life stori ...