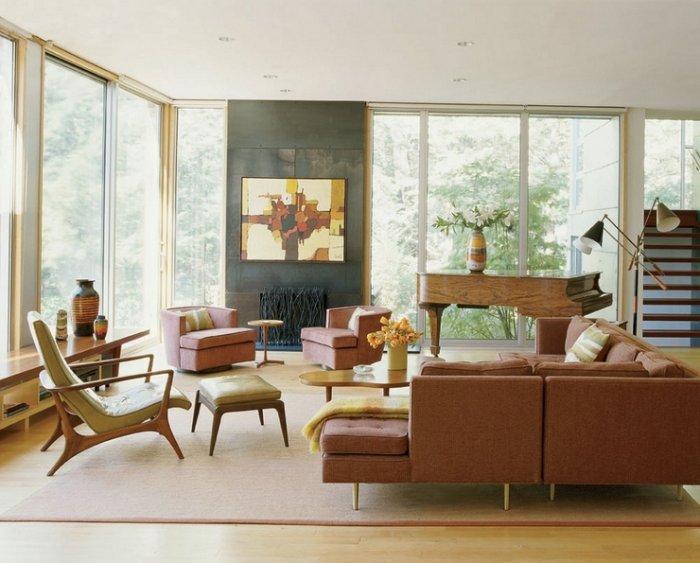 Today we will represent you this hillside “Atomic Ranch”, located in Southern California’s idyllic Corona del Mar bought, which owners bought because of its linear form, mid-century look and terrific views. As a huge renovation was needed, the owners turned to Laidlaw Schultz Architects (http://www.lsarchitects.com/) to make a restructure of its layout and to create a note of indoor-outdoor living. The leader of the architects Craig Schultz decided to open the home’s view and to combine warm materials and mid-century-inspired architecture with the owner’s colorful furnishings. You will see yourself that the end result is one beautifully restored blast from the past. 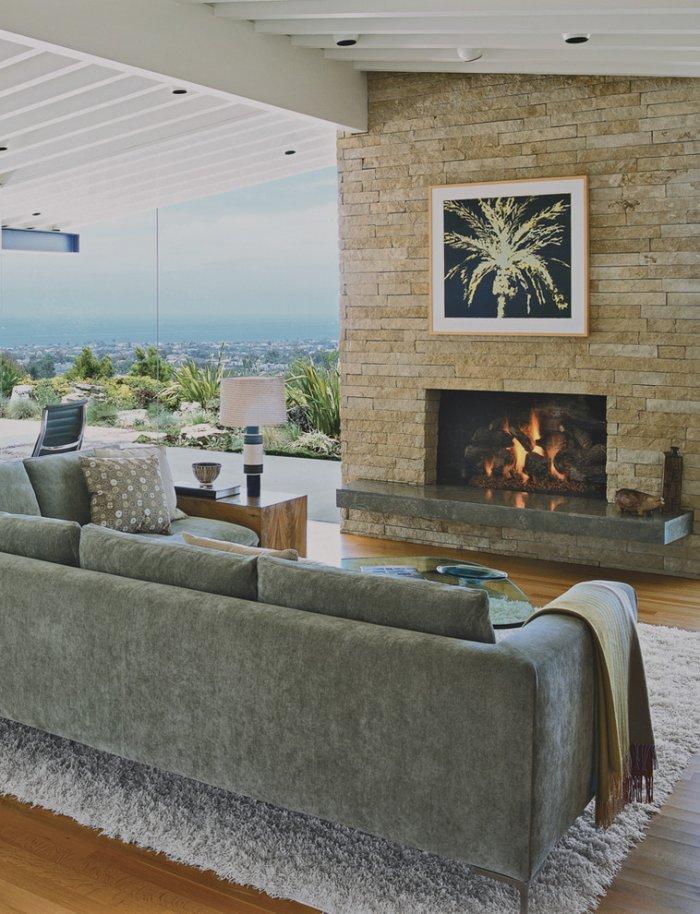 The home’s structure was reorganized and it was needed to triple the original 1,100 square feet. It was added also an office and two quest bedrooms. As the view was inhibited by the original sliding glass doors, the architects decided to build a cantilevered beam outside from the roof and designed a floor-to-ceiling window along this side of the house. 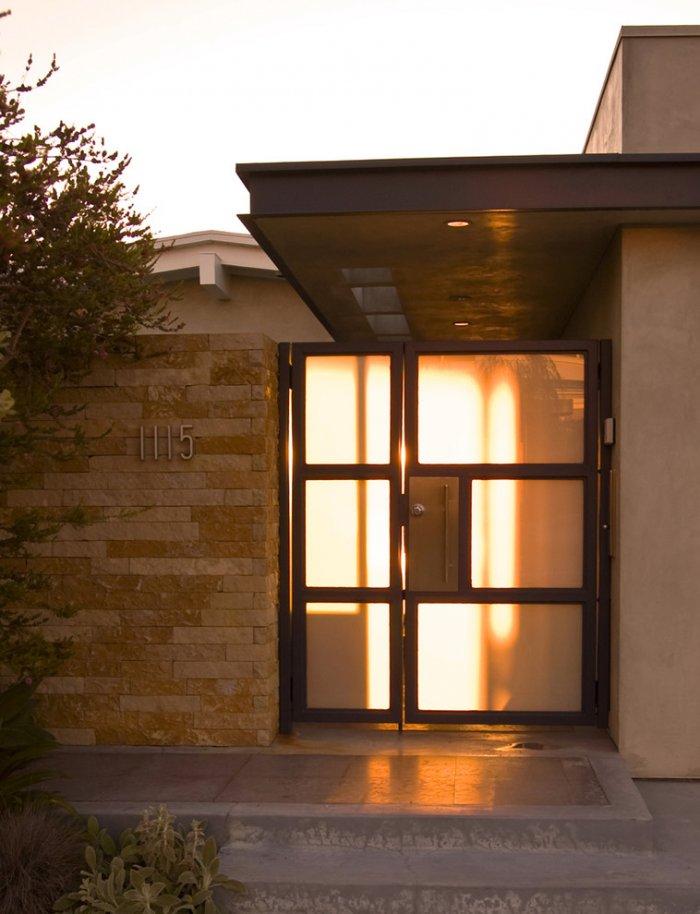 Making an echo to the lines of the other side of the house, the house’s entry has an exclusive mid-century note. The idea for the design came from the early Case Study Houses, located in LA in mind. Although it is significantly innovated, the home brings Case Study Houses’ style and also a concept for indoor/outdoor living. 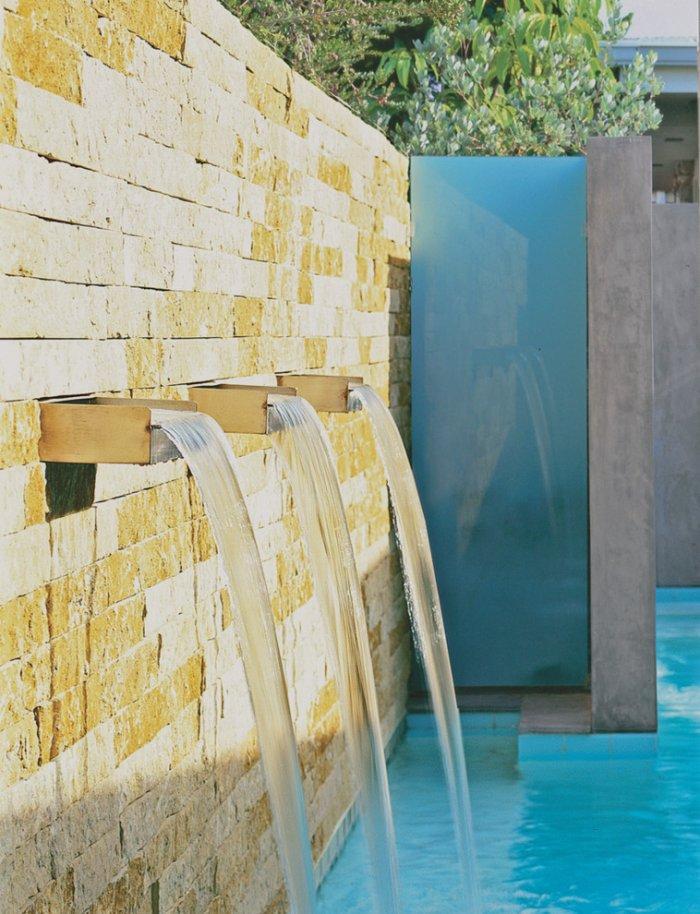 In the front of courtyard, the visitors are greeted with an unexpected Texas-limestone lined pool. 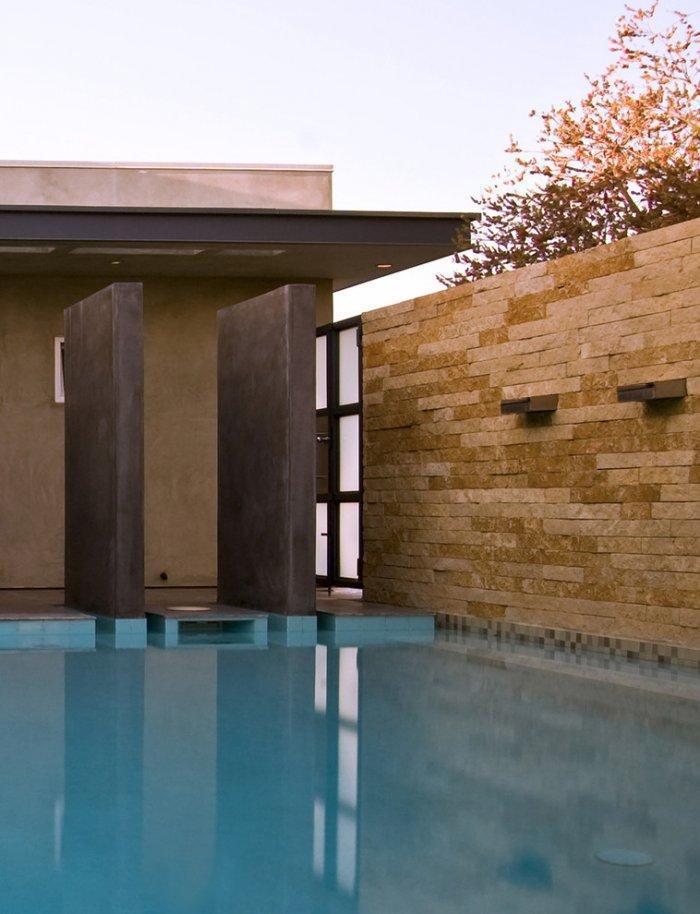 When you walk toward the front door, you are become witness of the designed by Schultz series of exclusive concrete walls, which provide peekaboo views to the pool. 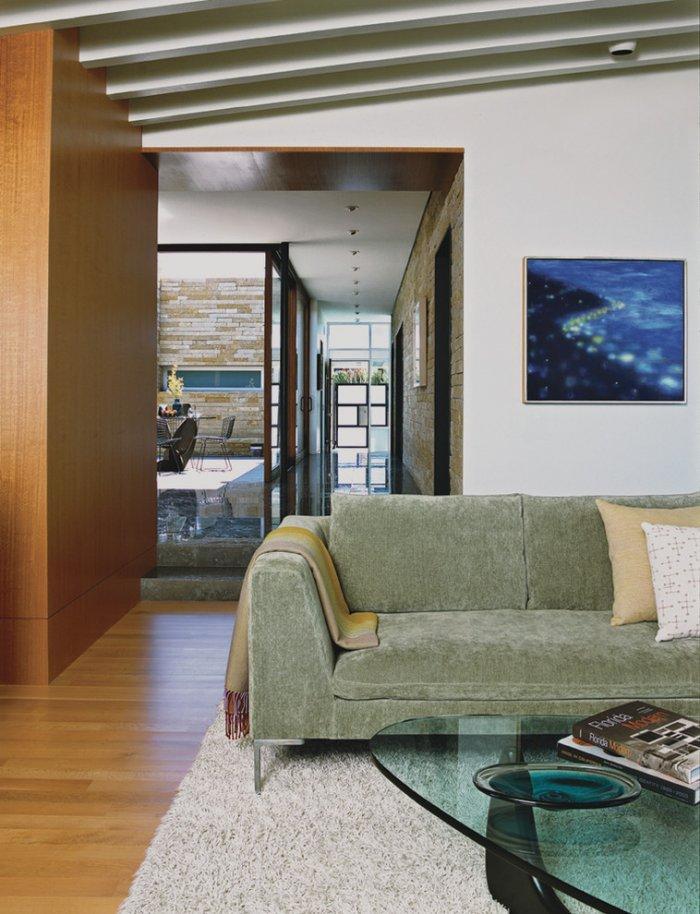 When we enter in the house, the entrance is transforming into a long hallway, which pass through the home and provide a look at the central courtyard and the view. 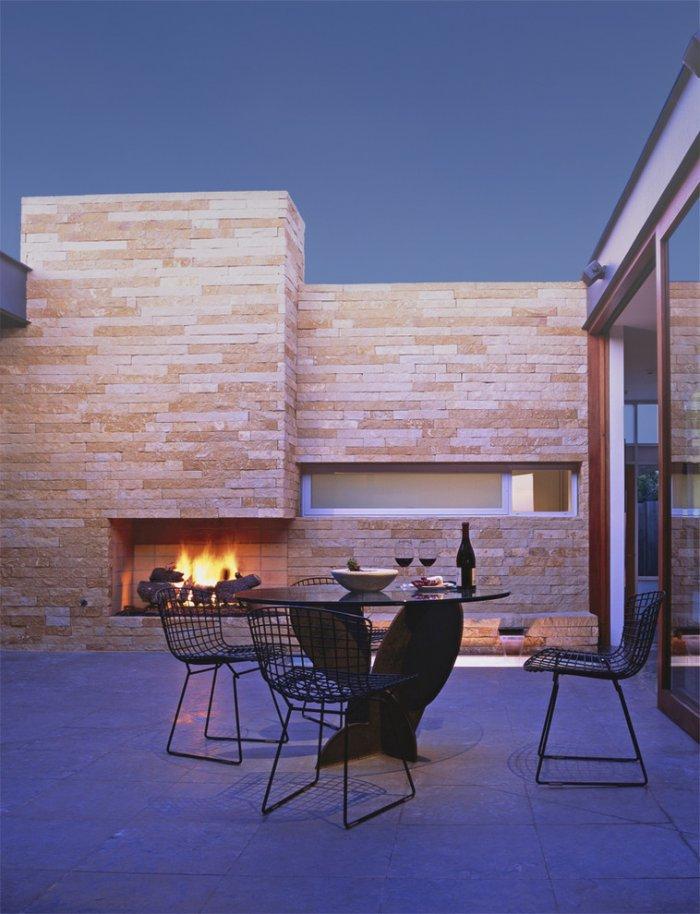 More Texas limestone walls are found in the courtyard, which could be seen from almost any corner of the house. For one elegant outdoor entertaining it is created a setting from outdoor fireplace, seating area with Bertoia side and integrated bench. 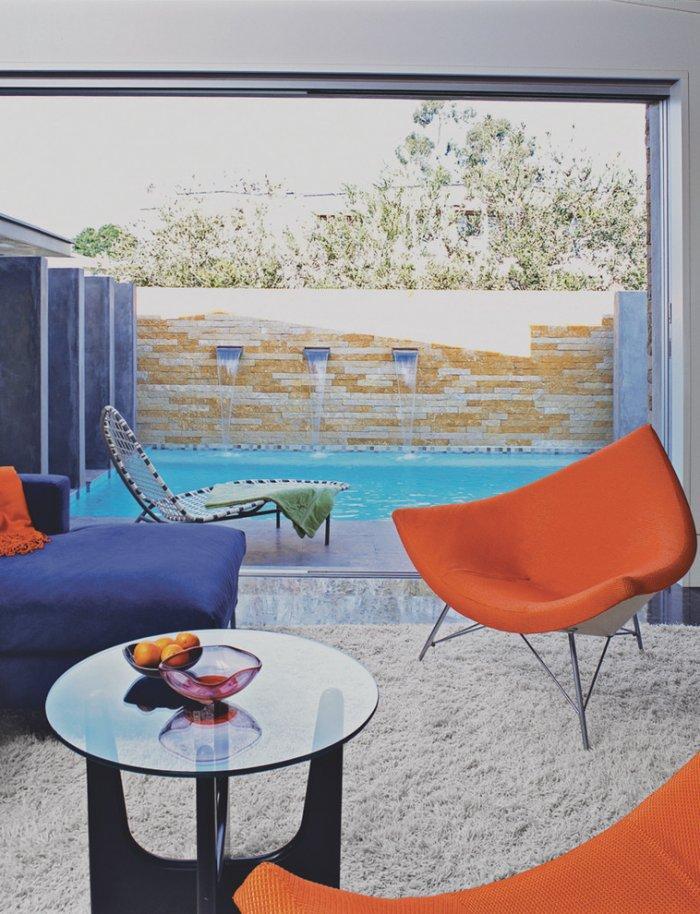 The clients have bought this house because of the mid-century style felt in the interior and exterior, so the designers wanted to stick to that feeling. 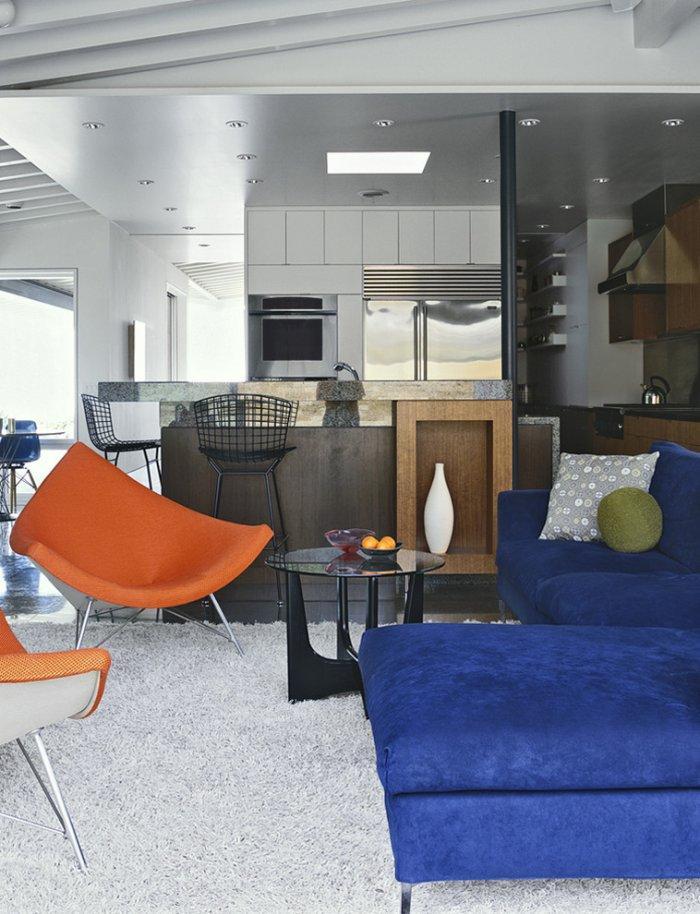 In the elegant family area, which is next to the kitchen, Tangerine George Nelson Coconut chairs (http://store.hermanmiller.com/Category/Shop-by-Designer/George-Nelson) make a balance with royal blue couch.
Sometimes you have one plan and then it is changing. The same happens with the original placement of the garage, which was crowding the family room. So the architects needed to move the garage on the other side of the house, and the family room was extended considerably. 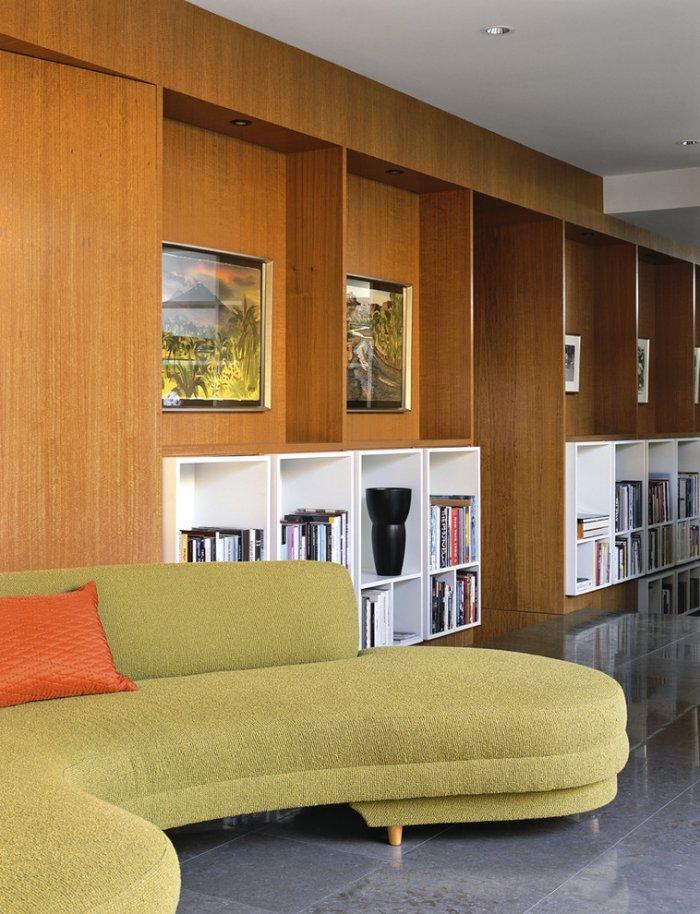 All the cabinetry is made by an exotic and high density wood with a pleasant glow. The boomerang couch was already in the house so the owners only needed to upholster it in a retro styled olive green color. 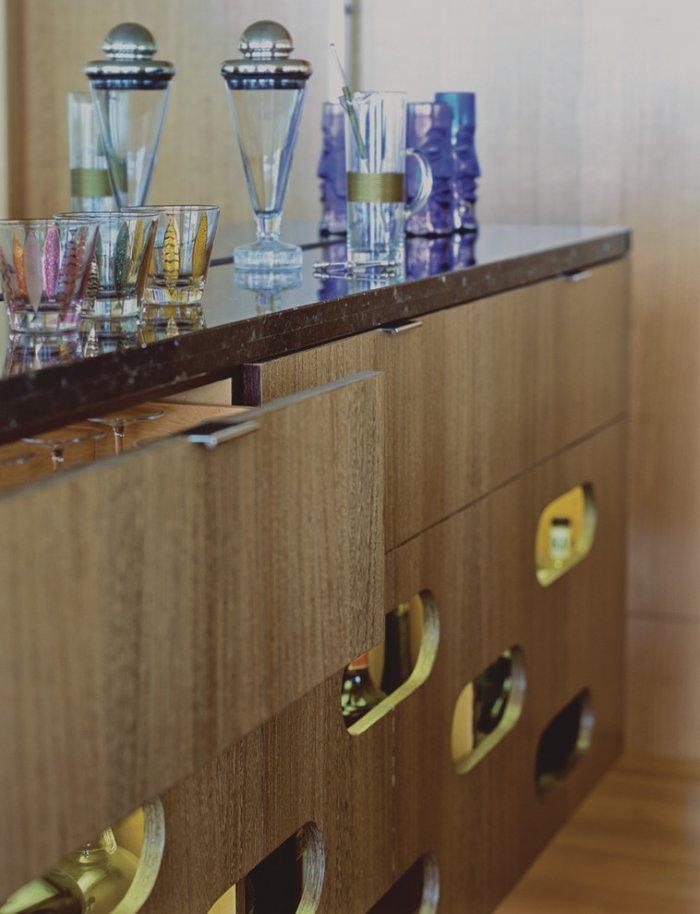 On one end of the house’s family room it is placed a mid-century styled bar, which is blending gorgeously with the warmly stained oak flooring. The house has a warm ambiance and a sense of flow thank to the presence of natural materials. 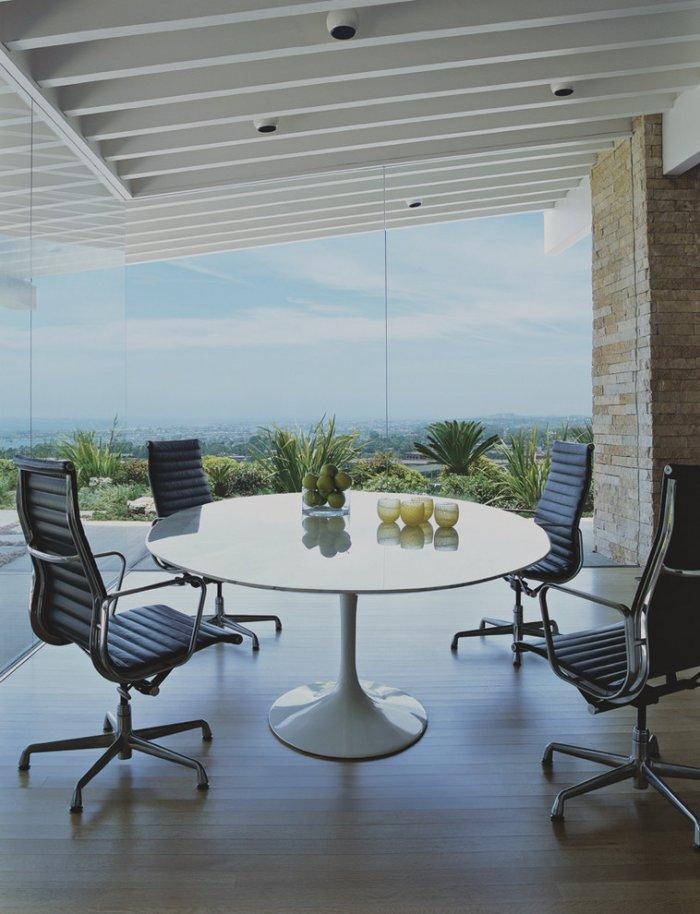 Originally on the other side of the house, it is placed the master bedroom, which has a beautifully ocean view, so the owners wanted to keep that. On the other side are placed the office and two quest bedrooms, which are facing the indoor courtyard.

The décor that we liked the most is the one in the simple dining area with its phenomenal view. On a distance from main living room, this area is equipped with four Eames Executive Chairs and a Saarinen Tulip dining table.
According to Schultz to work with an existent structure is always a challenge, but although that the home was finished efficiently and quickly with amazing results. The most important part of the great accomplished project are the clients and these one were really great because they were open to make all of their decisions up front, although they stuck to their initial choices.

In the following video you will find another impressive mid-century modern home that has been renovated:

Reasons to Use Artificial Plants in Sydney Homes

Spread the loveArtificial plants which may also be called fake or faux plants are emulations of ...

Spread the loveLED lights have come a long way since the technology was introduced to the marke ...

What are the Benefits of Smart Home Devices?

Spread the loveSmart home devices have become increasingly popular over the years. The latest S ...