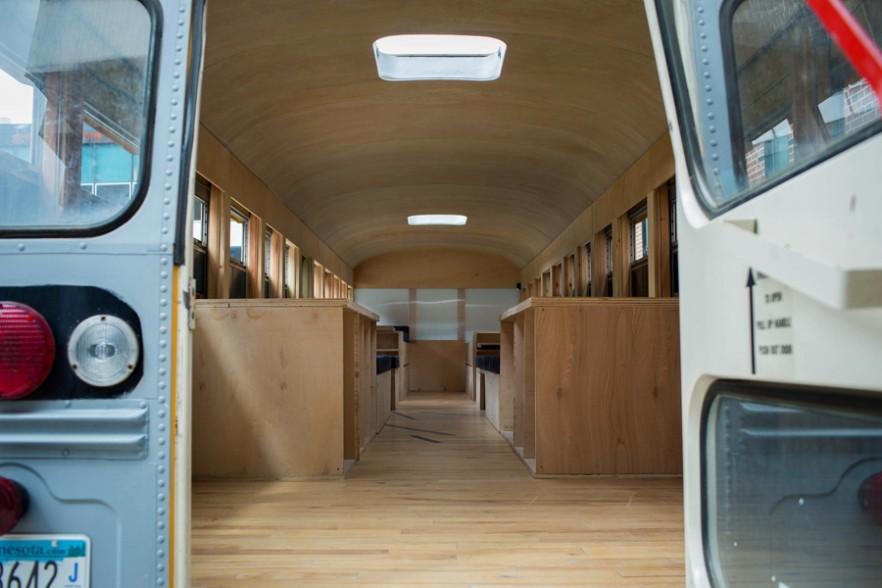 Mobile Cabin in a Bus

Hank Butitta was a student in architecture in the University of Minnesota. When the time to graduate had come he didn’t knew what his thesis would be. He was bored form creating projects in class that stayed only on the papers, where he had spent countless hours researching and inventing. Then, he decided to buy a school bus – what a strange idea! But later that turned out to be his most successful move as a student. 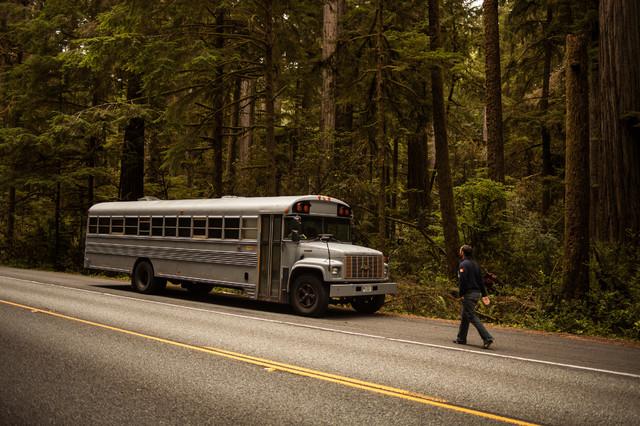 Actually, he bought an old bus that was in a really bad condition – metal ceilings, floors and walls. Furthermore, most of the seats were removed and the only thing that remained was a metal construction on wheels. Butitta gradually started removing the rust and preparing the bus to a state that could be later used for adding other materials in it. He entered the depths of home interior design. 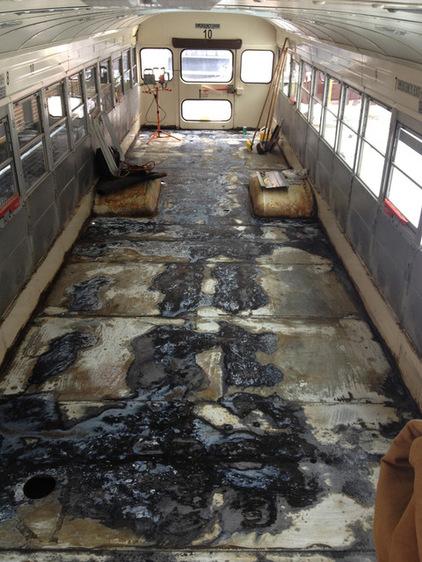 When the project was done it could accommodate up to six people in a pleasant, contemporary and simple hostile atmosphere. This is a real triumph of the creative thinking. There are several functional areas that are clearly separated one from another. For example, right behind the driver’s seat there is the bedroom area. Living areas are completed by several workstations that are ready to ensure that the working process of the occupants wont stop if they move in. There are also kitchen and bathroom spaces. 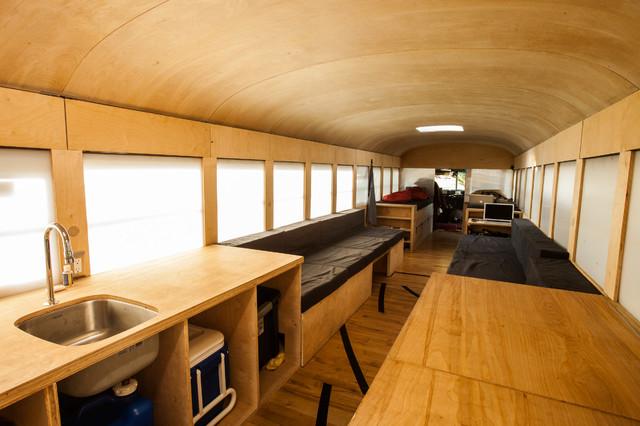 The last thing he built were the modular unites. It took him approximately one month to finish the job, using various techniques, machines and ideas. At the end Hank Butitta was surprised how impressive everything became and he has started loving his own project since then – something so important for an artist. 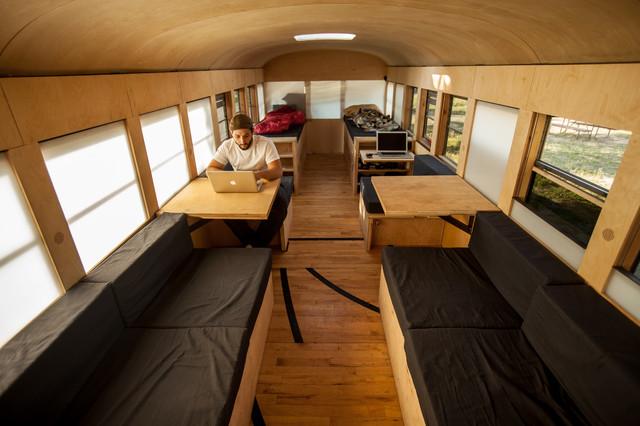 If we take a look at the project we must outline that is area is 225 square feet. His experience of knowing people that lived in tinier places helped him when his inspirational thoughts for small spaces became giving birth of ideas in his head. 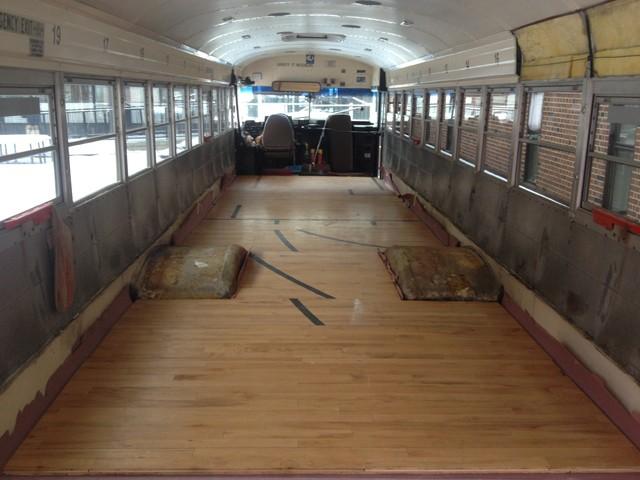 One of the most delicate problems in this living space is the private area. The only place when one can be only with himself is the bathroom. And the roof of the bus. However, this is not a place for a permanent occupation. The place can be used as a holiday villa or something like this, so the privacy is not the most important thing to think about. If you go with this bus on a vacation, you’d better bet on the beautiful sceneries that will open in front of your eyes. 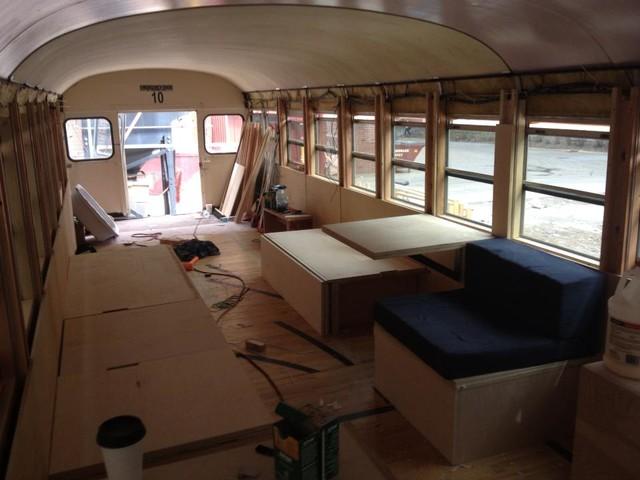 Butitta also plans creating the bus as a long-term living place but this means more upgrades and fixing the vehicle on a stable place – like his grandfather’s land. A big problem in order to anchor the bus is the energy source. The architect first wanted to place solar panels but then he decided to use generator, instead. Of course, this future plans may be executed or not – nobody knows. 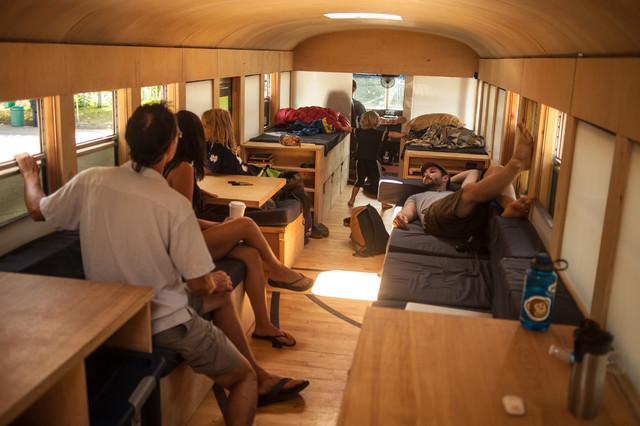 Right now at the moment, it is one innovative and spectacular way to transform non -living into a living area.

In order to assure bright transparent light in the place, the architect decided to replace the old blurred windows with panoramic above the bottom windows that reveal fantastic views towards the surrounding environment.

Plywood in a compressed state has been used for the ceilings. This softens the atmosphere as the wooden colors are warm and ensure tranquility. It took him only one day the install all the panels on the right place. What a clever boy! Actually, he decided to trust only to himself doing prototyping, because he didn’t have enough time for experimenting. The deadline was only 15 weeks after he started the reconstruction. One of the easiest solution after placing the ceiling panels was to choose a flooring that could match them and create a coherent interior. He chose wood again but in a slightly different nuance. This pleasure cost him $1 per square foot for the wood because he found these old gym floor panels in a lumberyard.

See the other images of the project by clicking them below:

7 Questions To Ask When Hiring A Renovation Contractor In Perth

Spread the love  If you are planning to renovate your kitchen, your bathroom, or any other ...

Choosing a Realtor for Vegas 55+ Communities

Spread the loveChoosing a Realtor for Vegas 55+ Communities You can find plenty of realtors in ...

Four Things Home Contractors Should Do To Keep Customers Happy

Spread the loveThe average home contractor must have more skills than wielding a hammer, handli ...