Paintings have always been a great approach to expressing inner feelings. From romantic love expressions to brutal negative sentiments and sometimes even your feelings towards the ongoing political conditions and crisis as well.

Art has played a great role in confronting vital political and social issues of the society we live in. Many artists have used their canvas to express their views, whether in support or against, in various issues. The very recent example being, the brushes of artists that spoke the racial reckoning!

Streets and walls in America were painted with the words “Black Lives Matter” as a way to protest the custodial death of George Floyd. Paintings have often been inspired by protests and anger of people over something or the other. Below, we have curated some of the masterpieces that were inspired by protests with which artists were able to put their views towards the world. 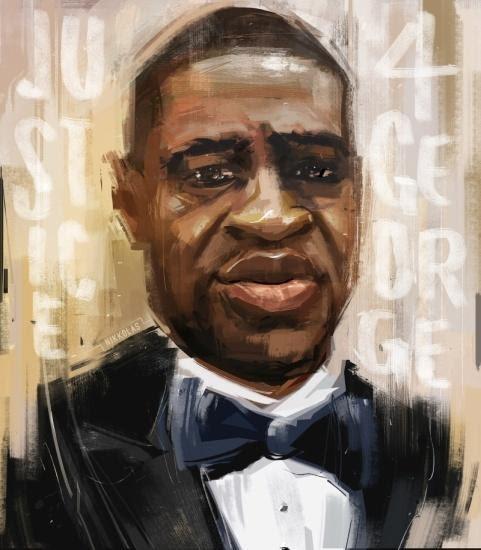 The spring of 2020 shall always be remembered by the world, and most importantly by the people and government of the United States. It is certainly one of the most pivotal times in the history of the country. The brutal and senseless murders of black people including George Floyd, Breonna Taylor, Ahmaud Arbery, and many others have ignited protests around the world for equal rights and protection for the lives of Black Americans.

In this era of social media dominance, many street arts, illustrations, graffiti, and portraits have circulated in various social media platforms and became outrageously viral. One of many such arts is the portrait of George Floyd by Nikkolas Smith.  The portrait features George Floyd in a black tuxedo and has words “Justice 4 George” written on either side of his face, in white letters.

The painting made a very quick round on the internet, as soon as Nikkolas Smith posted it on his Instagram handle. Smith added in the post’s caption: “George Floyd’s lives mattered…Black lives in this country are being destroyed by a virus of racism, fear, and hatred.” He further added that it was up to everyone to take a stand and actively work to tear down the centuries-old pandemic.

The Nation Makers by Howard Pyle 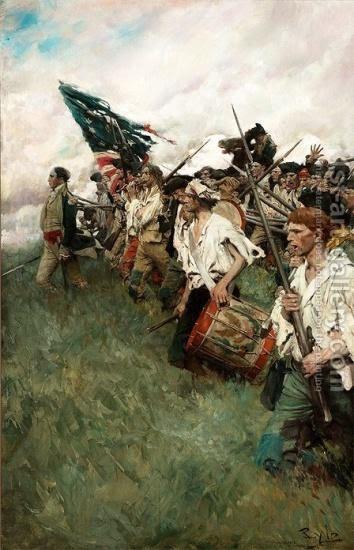 The Nation Makers is one of Howard Pyle’s finest compositions that ignited the viewer’s imagination. The painting has been subject to countless reproductions over the last century – such is the power of Pyle’s patriotic narration. It was painted in 1903 near the site of the Revolutionary War’s battle of Bardywine in Chadds Ford.

The painting has a very simple storyline: it depicts a line of soldiers in torn clothes and bandages. They march forward in the grass field filled with wildflowers with blood on their body. The painting is a stirring evocation of America as it saw itself in the aspirational years before the First World War.

This painting is truly a unique masterpiece. Of all the revolutionary war images Pyle made, this is the only one that does not have a specific story to interpret. The human mass in the painting is all moving forward into their future. The concentrated action gives us the hope that we too should bear our responsibilities honorably. 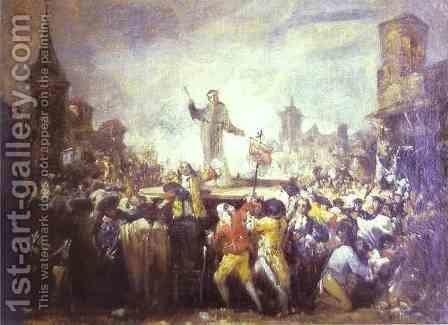 This masterpiece of the Esquilache Riots was crafted by the Spanish painter of the romantic era, Francisco De Goya y Lucientes. The artist’s magnificent production awarded him the position of one of the most pivotal Western painters in art history. The painter was one of the eyewitnesses of the whole event and went on to craft this masterpiece in 1766/67.

The subject of this masterpiece is the Esquilache Riots that took place in Madrid in March 1766. The protest began as the result of growing dissatisfaction with the rising cost of bread and other staples. They were sparked off by the series of unpopular measures affecting what clothes people might wear in public. The decision was enacted by the advice of the Marquis of Esquilache, whom King Charles III had made his Minister of Finance.

Eventually, in the end, the King managed to settle the rioters and dismissing the Esquilache in the process. However, the King went onto continuing his program of modernization. The most important consequence of the riots was the expulsion of the Jesuits and her colonial Empire.

The above are just a few examples of paintings and illustrations that were inspired by various protests around the world. The artists have always been free-minded and love freedom, and maybe that is why they love portraying the protest paintings. If you happen to be a lover of protest paintings, then the 1st Art Gallery is the place you got to visit. You will be astounded to see each painting handmade using genuine colors and finest canvasses available.

Nowadays, homeowners can attest that there seems to be a long list of projects that need to be ...

4 Tips to Find Your Dream Home

There is more to Alabama than college football. Even if you’re not big on football, you can sti ...