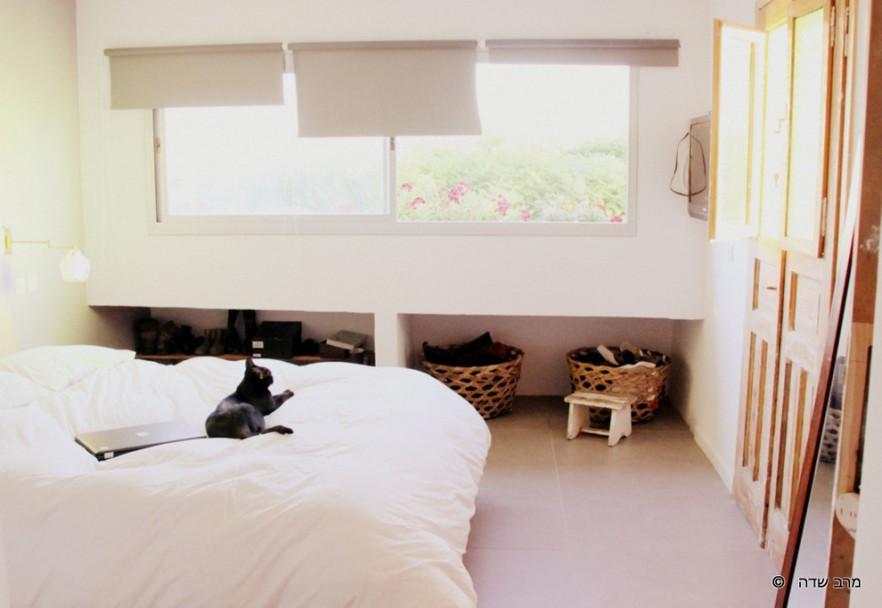 Merav Sade is one of those designers that can spot a hidden opportunity that has the potential to become a remarkable sight. This was the case when he found an old building in Tel-Aviv nested in the middle of apple orchards, consisting of two floors and a wonderful rooftop terrace. She like the place so much that she immediately decided that it was time for her dream to become true. The project she developed was not for her clients but herself instead. This resulted in an unique eclectic home with elegant interior design. 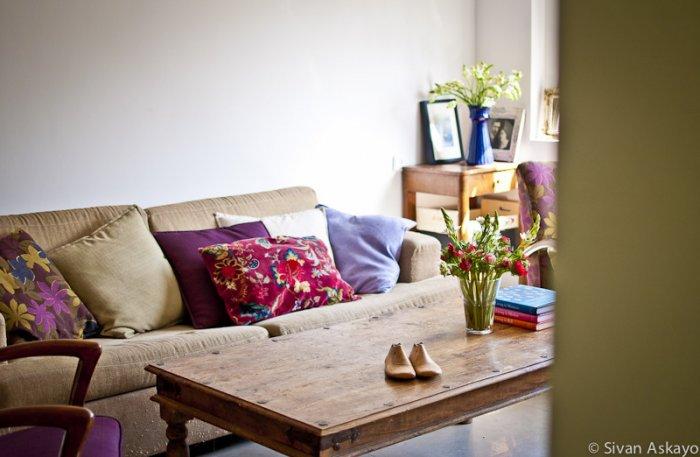 Sade stuck to the vintage style in the interior design of the house. In order to achieve the desired effect she used some old style furnishing as well as decorations that can be found all around the place – from the artwork on the walls to the little accessories that add the charming character to the place. The designer has also a huge interest in high-tech widgets so her place has turned into a nice mixture between latest technologies and old-aged appearance.

One of the most intriguing elements in the interior design is the authentic appearance of the original windows. Sade restored them to their previous state using the original arch. 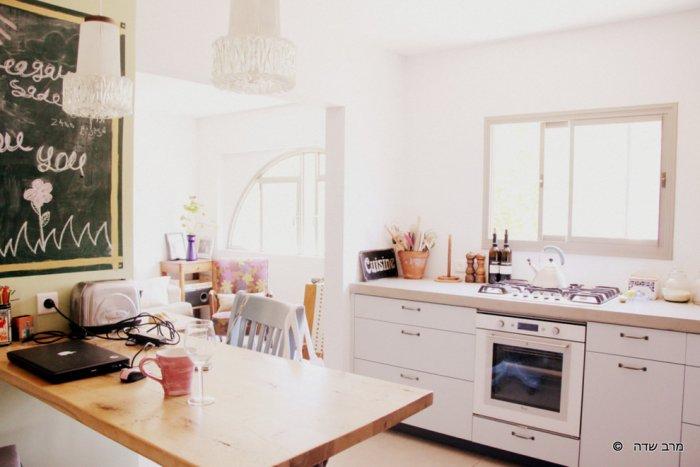 Placing windows without any decorations on them, just their raw appearance, keeps the place in a cheerful state while on the other hand they allow a lot of sunshine into the rooms, thus creating an atmosphere of brightness and positive emotions.

The interior designer took some of her furniture from her old home to her brand new one – like the blue roller chair that now perfectly matches the little wooden dining table in the kitchen. Sade said that she didn’t want to place bar stools there, so she decided to use her good old office chair instead of them.

Another great addition to the kitchen design is the lovely chandelier that Sade’s grandmother brought from Russia. 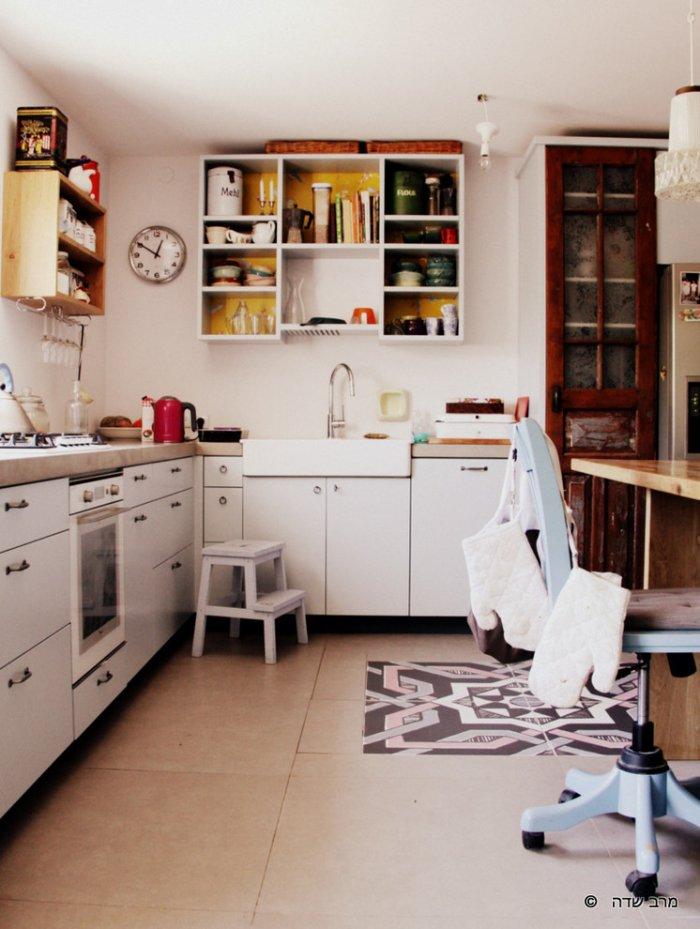 Looking down at the kitchen floor reveals an unique colorful and geometrical work with ceramic tiles. Of course, the vintage interior design style is present everywhere – look around and find the old-aged door stands that remind us that everything ages, like us for example. The design of the house in Tel-Aviv holds in its conception the meaning of life and time together. Its mature appearance represents life in its autumn – the golden years, and shows that even aging things have their own charm and we should be not afraid of them. Instead, we have to enjoy their beauty and style and do it with grace. 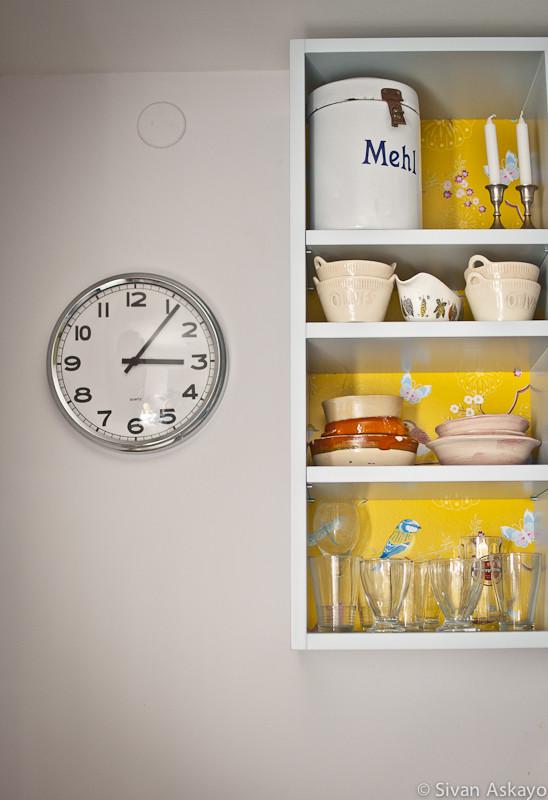 Using such kind of exposed shelves matched really well with the cheerful pale colors of the wall underline the sunny appearance of the place. 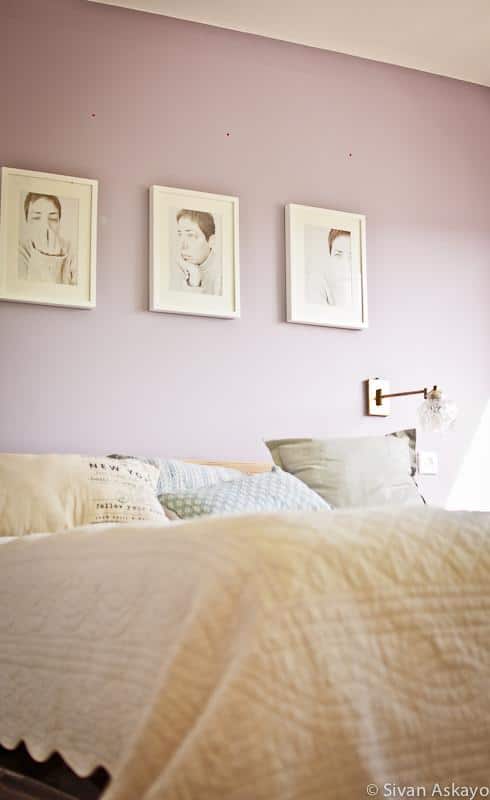 Sade is not only a talented interior designer, but she also has gift a for painting. Her self-made portraits are hanging above the bed and reveal the private character of the bedroom. You will also notice the bedside lamps that she found in a basement and repaired with such a big emotion. 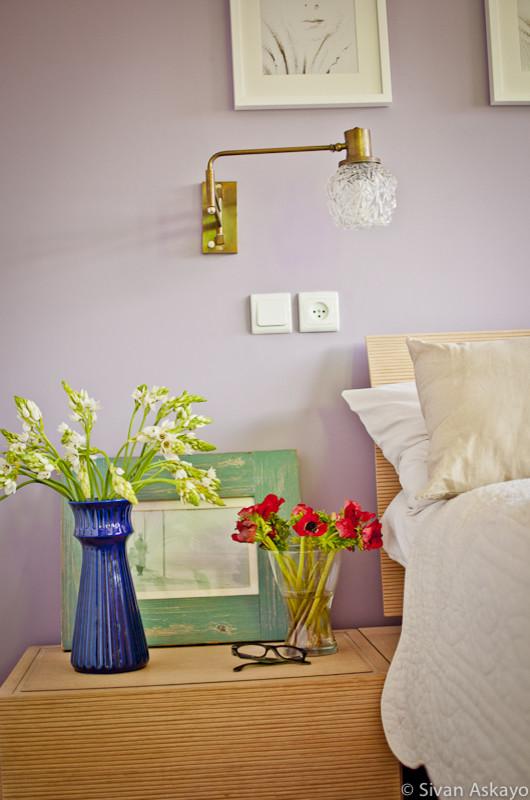 The main idea of Sade was to make a vintage place which is also very cozy and functional. That’s why she preferred to keep it simple, yet stylish. Some colorful accents represented by the gorgeous blue vase and floral petals show her passion for coziness. 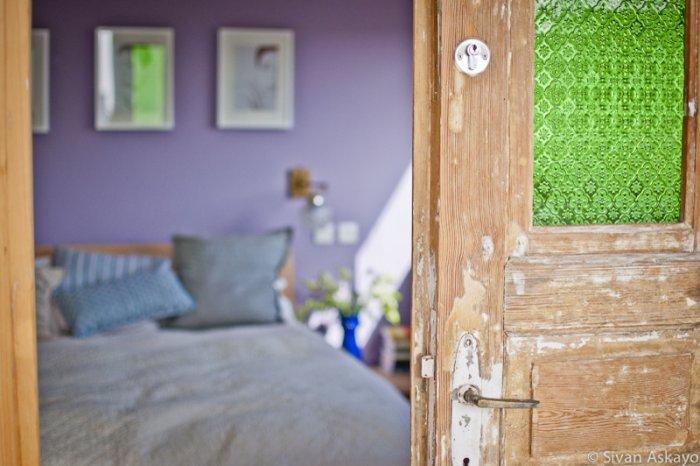 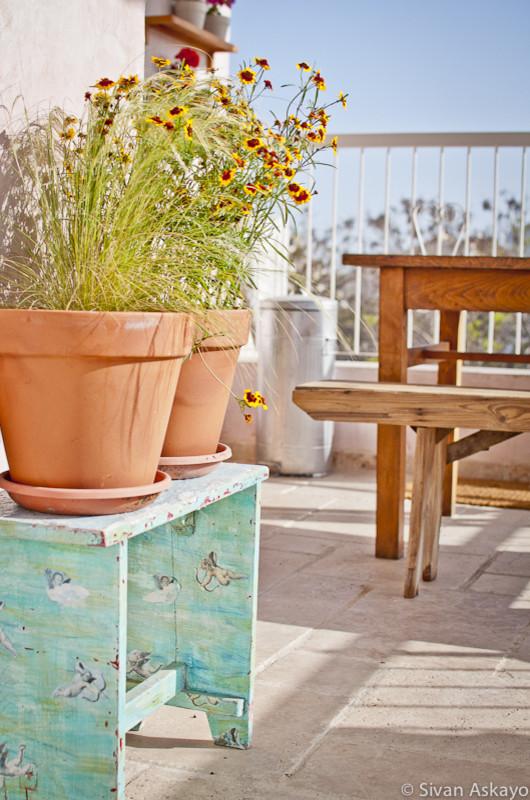 The rooftop terrace can be reached through the master bedroom and the first floor. Once upon the time, the access was not so easy, but after Merav Sade took possession of the property, everything shines in a perfect functionality. 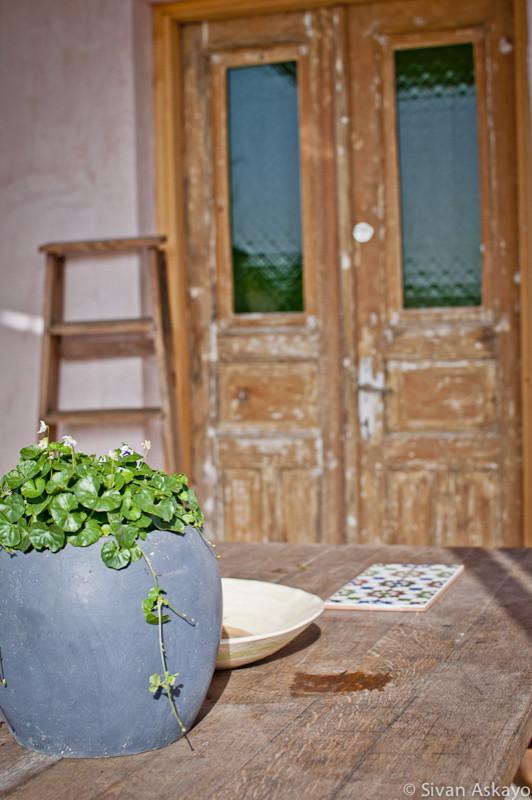 Antique doors are standing like guards that judge who can enter the rooftop terrace and who can not.

Using transparent vases for decoration in the bathroom, where the toilet is situated, is a fantastic idea! The transparency allows the colors to stand out as an accent in the room. This way the vintage interior design style is completed by adding a natural touch at the place. 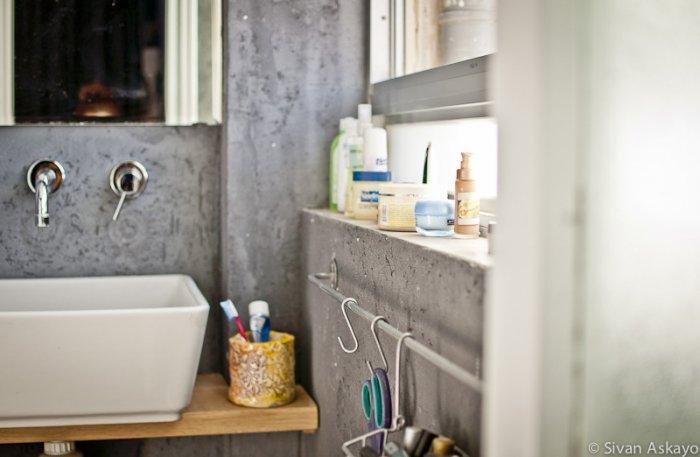 In the teen’s bathroom Sade placed just an ordinary sink. It was very cheap – $20, but its designs is functional and the simplicity perfectly matches the rest of the room. The functional advantage is that the sink is deep enough for Sade’s daughter hobby to splash the water when washing her hands. 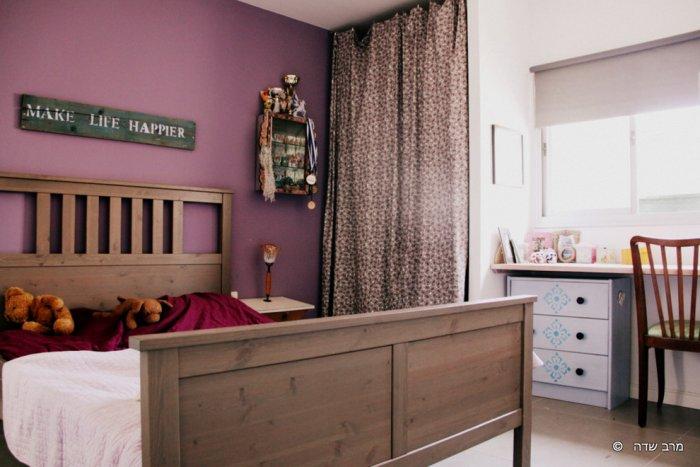 The daughter’s bedroom has not always been a sleeping place. It was originally a balcony, but after Sade reconstructed it, now it functions as a wonderful cozy bedroom. 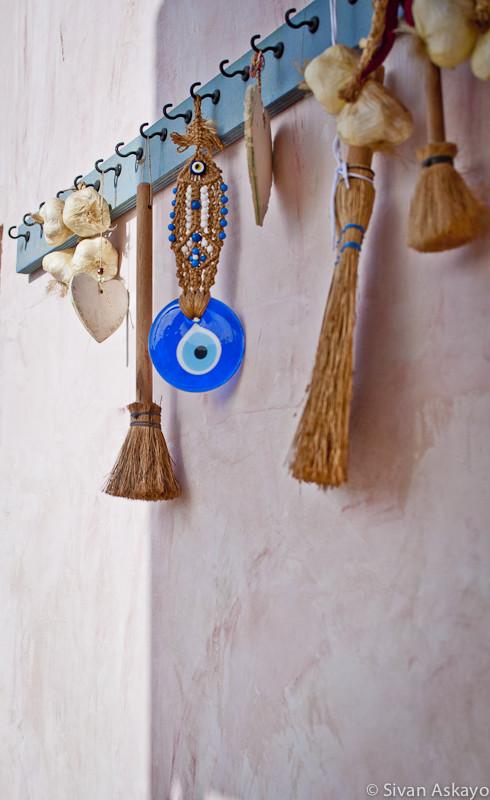 Little decorations make this place so special. They add unique style to place and fill it with Sade’s personal attitude to life and happiness. This hand-made key rack dates back from Sade’s school years when she made it.