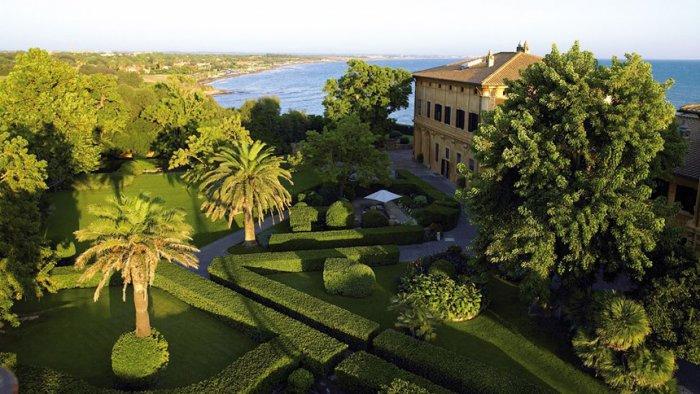 Count Giovanni Volpi recalls growing up on the Tyrrhenian seashore at Villa Rocca nel Circeo, the classical villa his mother. Countess Nathalie Volpi, built in 1955 with architect Tomaso Bruzzi to fulfill her vision of ancient architecture as interpreted by Palladio. ‘It’s a version of a Palladian design, a central colonnaded pavilion with side wings,’ says Count Volpi, who now maintains the beach house as his own.

Nathalie Volpi had fallen in love with Sabaudia, a village located halfway between Rome and Naples. The village provides the charm of a tiny community only sixty miles south-east of Rome. Countess Volpi bought up as much land at Sabaudia as she could in the mid-1950s, thus creating a thirty-acre site which extends from the Tyrrhenian Sea to Lake Sabaudia.

The classical villa which the Countess constructed at the seashore also relates to the nearby lake by means of a tunnel. Count Volpi’s childhood memories include picnics at the lake, where a pavilion commands a view of the ruins of a villa which belonged to the Roman general and epicure Lucullus.

Countess Volpi used to drive here from Rome in her cane-covered Fiat and fill the house with guests. Her son has preserved the tradition of Volpi hospitality and the dramatic simplicity of the structure and interiors.

Roman-style brickwork clads the tunnel which leads from the house on the dunes under the coast road to Lake Sabaudia’s edge. The same brickwork flanks the walls of the ceremonial drive which leads to the villa’s main entrance. Inside, Pompeiian-style furnishings predominate, with crimson hangings which confer an austere, regal character on the high-ceilinged classical spaces. There are Roman capitals and sculptures throughout the house, and the color of the drapery fabric was borrowed from that of the cape linings of Roman Imperial cavalrymen.

The winter dining-room opens on to a terrace which is used for candlelit dining during the summer. Most rooms in the villa have sea views, especially the symmetrical grand salon. Here, travertine floors are set in a herringbone pattern, and the ceiling is groin-vaulted.

A grand staircase leads from the salon to the upstairs guest-rooms, which are furnished with seventeenth-century pieces. Red draperies hang from bronze spikes and contrast with the white stucco walls and travertine floors. Expansive sea views from the window balustrades convey the impression of being aboard a ship.

The backdrop to the villa and the ocean view is Monte Circeo and the wild natural landscape. The villa itself is surrounded by dunes that cannot support lush gardens, and thus the architecture is seen in stark relationship to the landscape, where the changing light creates shifting patterns on the temple-like forms.

In this minimal setting, the striking colonnaded porch of the central block seems to hover like a mirage above the sandy beach. In one corner of the porch, chaise-longues covered in the Volpi family colors furnish the space, while campaign chairs surround a patinated bronze table with a stone capital as its base. The porch’s Ionic columns frame views overlooking the seascape, and broad stairs lead nobly down to the sand and sea.