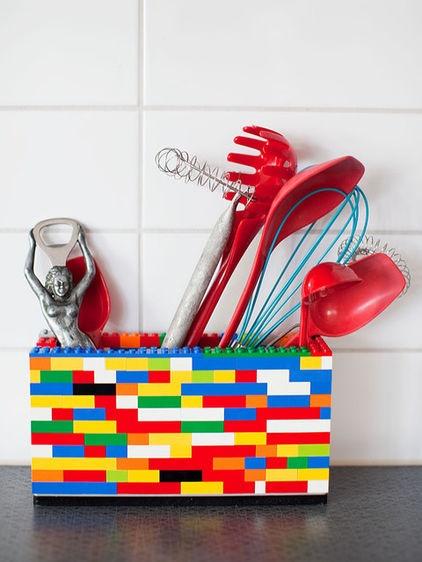 In 1987, the product of LEGO was awarded the title of “Toy of the Century”. Later on, in 1999, the Fortune magazine named LEGO “Product of the Century”. The familiar LEGO products consist of components, blocks, that can be put together in numerous combinations and create something. The basic block of a LEGO is a flattened cube of plastic of the same colour that can be put together in 24 different ways. For example, six blocks of the same colour can create around 100 billions of possible combinations.

The architect Tom Alpin once said that building with LEGOs is a process he loves because once they are pulled out of the box, you have to work with them before playing. The building process can take hours.

The Philosophy of LEGO

The LEGO company has a unique word “LEGO”, the toy. In marketing, it managed to remove the clutter and focus on one word. However, LEGO does not mean anything but LEGO. For more than 50 years, LEGO was responsible for transforming the way people learn, play and think. The company has manufactured a toy so simple yet capable of shaping complicated things. LEGO’s motto is “Keep It Simple!”.

The critical points of LEGO are simple:

LEGOs are very versatile materials which can create nearly anything. The exploration of Transmedia World has a starting point from the definition itself. The LEGO aesthetics are based on these characteristics, which are modularity, translatability, intertextuality, and the tripartite nature of LEGO minifigures.

The Community and Art of LEGO

These AFOL members can determine which LEGO bricks are real and which are fake. They even created a test to determine which pieces are the original ones. Often called the “drop test”, if they suspect a piece is not a LEGO brick, they will simply drop it on a tabletop. The sound instantly tells them if it’s the original LEGO piece or not. Fake pieces sound hollow, while the LEGO pieces have a more solid sound.

For example, LEGO isn’t the only toy that has bricks. Because it became so popular, it created the opportunity for competition. For example, the Japanese nanoblock was born, which is a direct competitor to LEGO. Just like the LEGO bricks, nanoblock bricks are slightly smaller than LEGO. You are able to create even more complicated designs, that give a more natural pixel-like object, buildings and even characters that are closer to reality, than LEGO.

LEGO is also one of the few toys that can be used as an artistic medium, a tool for education and can bring together a global fan community. Even if you search the word LEGO on any sharing-photo website, many results will appear. The majority of the picture you may find are not snaps from the latest trips to LEGOLAND or LEGO Star Wars, but MOCs. MOCs or My Own Creation are impressively crafted LEGO creations. The building of MOCs is as old as the LEGO brick itself. However, the phenomenon of sharing them with like-minded fans on an international scale is relatively new. They happen on unofficial Internet websites and forums that are dedicated to LEGO building.

Max Buechler is a LEGO mosaic artist, and he says that he has a lot of experience using LEGOs from his early childhood. He always loved them; however, most of the experience has been in crazy 3D objects. Besides, now he plans to use LEGO bricks in a more 2D sense by taking advantage of the many available colours to create a type of mosaic. For him, LEGO is the perfect medium for a mosaic to take form while adding a blocking, 8-bit aesthetic.

For many LEGO fans and artists, making a living out of LEGO is the ultimate dream. However, only a few of them had the luck to have the LEGO builder job. This job consists of maintaining and creating giant models in LEGOLAND. Meanwhile, Master Builders had to previously build half-scale prototypes for their creations. Now, they are assisted by advanced computer software that allows them to perfect the LEGO model virtually before creating a physical model.

However, not many can work with buildings with LEGO bricks in this official avenue. The lucky few expert builders and artists need the LEGO Certified Professional. These individuals, while they are not LEGO employees, they are recognised as the official Trusted Business Partner. Unfortunately, the title is not easily given by the LEGO Group. To even receive certification from them, an individual must demonstrate a certain degree of proficiency in building enthusiasm for the LEGO brand and its building system. Besides, it is also needed to have a particular approach towards other LEGO fans and the public.

For example, Nathan Sawaya is a New York-based artist that started to sculpt in LEGO bricks as a way to unwind from his high-pressure job. He used to be a corporate attorney, but after his LEGO sculptures caught the public’s eye, his website has received so many views that it crashed. Nathan realised he has to quit his job and get building professionally. He said that he loves all of his pieces and if he is asked what his favourite is, he would answer that the next one.

Another LEGO artist, called Adam Reed Tucker is the designer and creator of Lego Architecture sets, and he lives his childhood dream as an adult by playing with the same childhood toys. Tucker was an architect for high-end residential projects; however, the real estate industry refused many of his designs and construction projects. Tucker found his way in Legos. After he got used to the skills and started to create what he wanted to, he began building models of architecturally significant buildings. During this re-learning process, he constructed a new career. At a convention, Tucker showed some of his homemade models and attracted the attention of chief executives.

LEGO has always had its roots in architecture because the little plastic pieces are called bricks. However, the real world is much more complicated. Architects are continually blending old and new ideas to create innovative designs. Because of this process of theirs, new styles are born when the building can show a new approach for other architects. If you ask an architect what inspired them to choose this profession, almost all of them will say they used to play with their LEGO bricks as a child.

But while the influence of LEGO is evident for architects, not many know about LEGOs contribution to architecture. Through the lens of architecture, you can understand why LEGO holds the name as the “Toy of the Century”. In 1960, the Modern style became popular in America, because the LEGO Group has challenged its designers to invent a set of components that would add a new dimension to LEGO building. Soon after 1962, the LEGO “Scale Model” line was directly inspired by the work of architects and engineers. This is what made LEGO inspiring, and its influence on the development of construction methods and designs has led to Modern Architecture.

Architecture can thank those bricks in any way. For example, Israeli-Canadian architect Moshe Safde has set off the world of architecture alight with his Habitat 67 community housing project. FOr Montreal Expo in 1967, he used LEGO bricks to do the initial planning. Another example is the Japanese Metabolism movement. The movement is based on modular, precast concrete components, similar to LEGO bricks.

In the end, it looks like a building with LEGOs, but more oversized bricks. Modular construction is faster, better and has more of creating a layout into grids that are essential to the economy.

Increasing Longevity of Your Furniture: What All You Can Do

Spread the loveYour home furniture items are one of the integral parts of the home decor. Witho ...

Ways to Enhance the Value of Your House

Spread the loveHas the value of your house been decreasing? This is a common occurrence where t ...