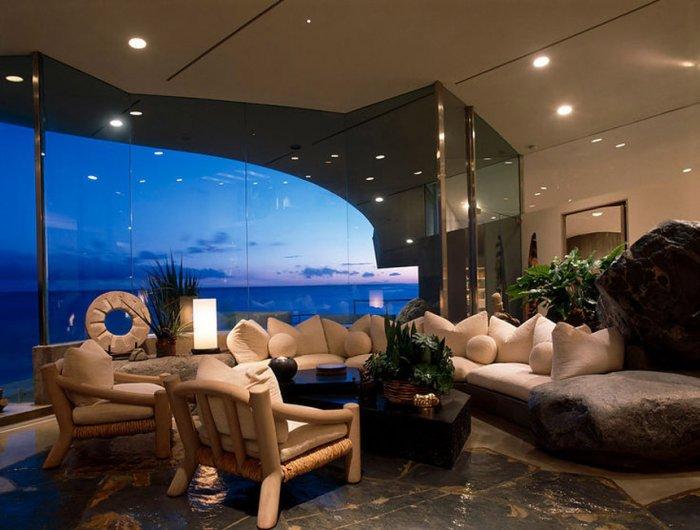 The community of Malibu occupies a series of rocky points, shallow coves and sandy beaches facing south and west towards Santa ! Monica Bay and the Pacific Ocean along the Southern California coast. The pleasant climate makes surfing, spearfishing, diving, running and sunning possible year-round. The rural character of the hills nearby adds a primitive quality to the area, which was once inhabited by native Americans. Chumash names like Topanga, Zuma and Malibu itself still refer to the ancient architecture trails which wind through canyons and down to private coves.

Residents Stanley and Lyn Beyer wisely listened to the advice of their interior designer, the late Michael Taylor, when he recommended the renowned California architect John Lautner as the perfect person to capture the true nature of their isolated ocean-front site. ‘The site is thrilling,’ Lyn Beyer says as she recalls their decision to ask Lautner to design their house. ‘We feel like his design makes our house part of the landscape.’ On its rocky point with patches of sandy beach and surf hitting the rocks in layers of white and blue, the house is indeed very contemporary without being hard-edge or high- tech in feeling.

Lautner’s brand of modernism developed out of the organic principles of Frank Lloyd Wright, his teacher and one-time employer. A shaped concrete roof balances over glass walls and conies down to the ground at various points around the house’s multiple sides. The rough tan-grey concrete blends with the colour of the wet sand. This expansive canopy mimicks the nearby Santa Monica Mountains. ‘The design is a segment of a cylinder, tilted up and then cut to create an irregular perimeter,’ the late architect explained. ‘It appears both natural and timeless.’ The curved roof line also acts as a protective cover over part of the ocean-front terrace, where a concrete table surrounded by cylindrical concrete stools is used for outdoor dining. Little maintenance is involved to keep the concrete surfaces and concrete-and-slate terraces in good order.

Inside, the living-room is like a spacious theater focused on the continuous performance of the surf pounding at the rocky point. This view is especially enjoyable from a portion of the living-room that perches over Santa Monica Bay. The light changes continually in a delightful way. Together with Lautner, Taylor, who designed the interiors, imported large river boulders to the site and placed them throughout the house. The floors also have a natural appearance, being made of concrete and sawn slate polished to glisten like the ocean waves.

Lautner appreciated architecture without limits or superficial connections to fads or movements. He inherited the concept of the open plan and connection to nature from Wright. Yet while Wright always spoke and wrote about the earth, Lautner, in his siting of this house, orientated his architecture to the water. His fluid plan opens up the waterfront side to the view by means of glass and curved terraces with glass railings. The building both fits into the curves of the coves and balances out over the rocks and surf, its design echoing the organic character of the tidal waters.

Reasons Why You Should Hire A Professional Roofer

When it comes to roofing, there are many reasons why hiring a professional is the best option. ...