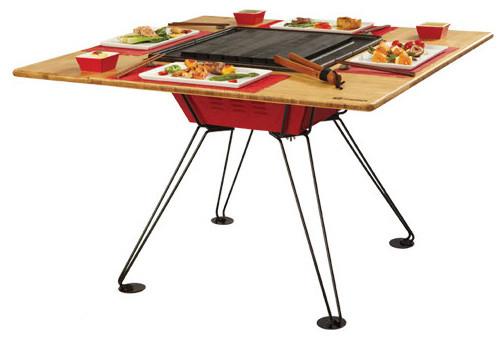 Offset grills are the perfect equipment for your grill party. For one thing, they are versatile. An offset smoker can be used just like a regular grill. It is also used for smoking and barbeque.

Offset smokers have a chimney pipe coming out of one side. The middle is the main cooking area. This is a barrel-like enclosure with a lid that lifts up and is put down to ensure that the smoke fully encompasses the meat. To the other side of this chamber is the heat source, where the charcoal and wood go. This heat box includes a vent that one opens and closes off to restrict oxygen and cool the cooking chamber.

In the heat box, you will want to use charcoal and a type of wood. If you decide to use wood chips soak them for about half an hour and dry them. This method should produce better smoke. Some forego using wood chips and prefer just large chunks of wood that don’t need to be soaked.

The most popular types of wood for cooking include hickory or mesquite. Other types of wood are popular too depending on the flavor profile one wants. Woods like cherry wood, applewood, or maple are also popular. Pinewood or evergreen wood is no good for smoking.

It would be great if your smoker had a built-in cooking chamber thermometer. Otherwise, there are thermometers that one can insert into the meat to track the meat’s core temperature. When the inner meat temperature reaches 195 to 205 degrees Fahrenheit the meat should be done.

Unlike with the outdoor electric grill, the temperature in an offset smoker is more difficult to control. Placing a pan of water in the heat box is one way to do this. The water helps lower overall heat and produces humidity that helps the meat stay moist. Take notice of the type of smoke the heat box is producing. If it is a thin blue smoke that is escaping the chimney, that is optimal for the cooking process.

You don’t want a heavy white smoke. This type of smoke indicates the cooking chamber may be too hot and the meat will not get the proper smokey flavor. Go ahead and reduce the fuel, restrict the oxygen supply and/or put that pan of water in the heat box till the smoke changes to thin blue. Now, we discuss the best meat to grill.

Let’s suppose that you are planning a shorter cookout with a smaller brisket cooked at a high temperature. The first thing to do is to prepare the meat. To prepare brisket, trim the meat of excess fat with a very sharp knife that is sharpened by an electric knife-sharpener. Also, trim off thin parts of the meat that is likely to burn during the cooking process. Then prepare a rub for the meat that will create a crust. A simple rub may contain the following:

Before applying the rub, coat the meat with vegetable oil so it will easily adhere. After applying the rub, carry the meat to the cooking chamber of your smoker where it will cook uncovered and be enveloped and fully flavored by the smoke for at least six hours if we are looking at a 12 hour total cooking time.

This is known as the 3-2-1 method. Divide any anticipated cooking time by six. Multiply that result by three to get the initial bare cooking time. Two times the result gives the covered cooking time. What is left is the finishing-up time for the bare meat.

The meat that will take the second longest to cook is pork butt. Pork butt should take more than five hours to cook, although a really substantial pork butt could take longer. Think of cooking pork butt at about an hour per pound. Pork butt normally does not need a lot of trimming. If there is excess fat some of that may be trimmed.

The rub can be very close to that mentioned above, although feel free to modify the ingredients. A very small amount of sugar can be added or adobe chili powder. It is best to subject this meat to the 3-2-1 method as described above. Make certain moisture is added to the meat when it is cooked covered. Pork butt is popular for creating pulled pork sandwiches served with pickle on top.

Baby back ribs take the least amount of time to cook, at about three hours. When done right baby back ribs, are especially tasty. Like all the other meats you will apply a rub over an oily coating. When it is time time to cook the ribs covered all sorts of tasty ingredients can be added for the ultimate rib experience.

The choice comes down to adding sweetness or spice generally. Besides adding moisture to the ribs for sweetness consider adding honey and brown sugar. For spiciness add chipotle powder and hot sauce