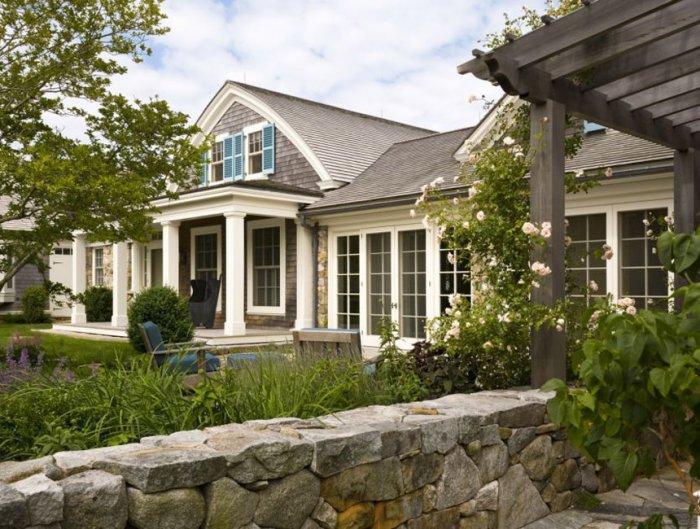 Cohasset is a beautiful town, originally a resort and now a suburb. It was one of the defining coastal places where in the late nineteenth century Americans came to terms with their colonial past,’ explains Robert A. M. Stern, who renovated a house in this New England harbor town between 1992 and 1996. ‘This house was originally built in 1906 for a Boston family who summered at Cohasset,’ Stern continues. ‘An earlier ballroom was, with regret, taken down, but it blocked views and darkened the interiors.’ Its removal opened up the view for the new living-room with a deep side porch with Tuscan columns. In place of the ballroom is a new formal garden and pool with a west-facing harbor view. Stone outcroppings and pavers outlined with grass surround the pool. The architecture design is simply impressive.

The house’s interiors reflect the style of Ogden Codman, the great turn-of-the-century American decorator. A small existing study was panelled in cherry, and each fireplace was given an intricately carved mantel. The master bedroom received a vaulted ceiling and a bay window to expand the view. Carved dolphins and boats decorate the hall panelling. ‘The entrance hall is one of the best rooms of the original house,’ says Stern, ‘and some of that woodwork is old and some is new. You can’t quite tell what is new or old. It all looks as if it is a grand old house which has just been freshened up by new owners. In fact, that’s just the effect we had in mind.’ Stern worked with Randy Correll, project architect.

The house is Shingle Style with Georgian details.

The grey shingle cladding is offset by a tall stone chimney and white wooden window and door trim surrounding the many generous openings – including several oculi – which provide a multitude of framed views of the water. The massing of the house is asymmetrical, with bay windows and dormers, a widow’s walk, an added conservatory, a broad terrace facing the harbor view to the south and a number of low, gabled roof lines. Surrounding the house are gardens with stone and wood rail fences.

Red Oaks invites comparison with historic Beauport, built in 1907 at Gloucester, Massachusetts, by Henry Davis Sleeper. A man like Mr Sleeper would think nothing of weaving together new and old, and new elements which looked old,’ explains Stern. ‘He pillaged other houses or bought parts of them, rescuing them from demolition. So this is an old New England tradition we followed at Red Oaks, and it makes it a palimsest, a layering of elements.’ Like Beauport, Red Oaks has a spectacular site. ‘The site is very special in the sense that it is wonderful to be up on that rock,’ says Stern, describing the house’s incomparable perch on a forty-foot-high granite outcropping.

How to Remove the Nasty Smell in Your Basement

Your basement may serve as a guest room, storage, or living room. Regardless of its function, i ...

Tips for Redesigning Your Home to Increase Floor Space

The need to redesign your home can become unavoidable due to several factors. Some homeowners r ...

Have you ever visited a city or town just for its architecture? If not, you should add it to yo ...