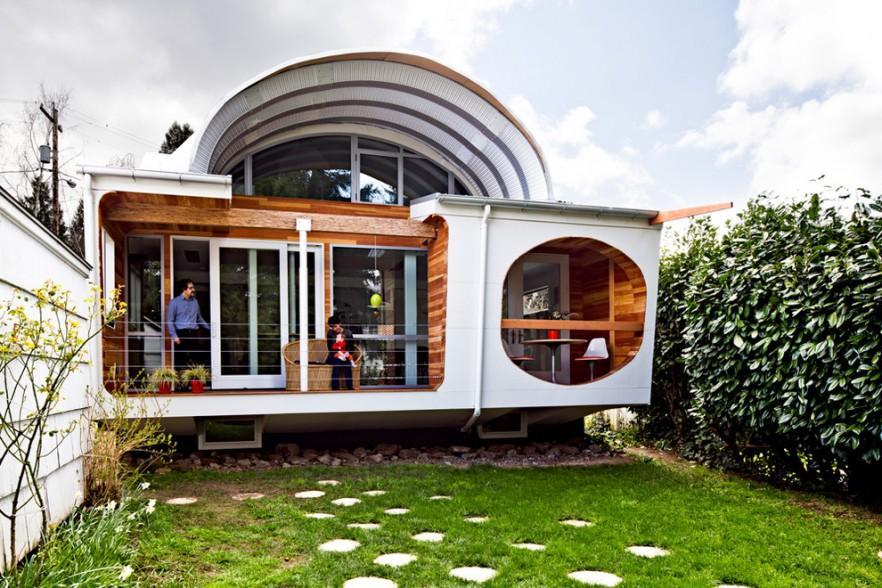 Do you think that you will have to chance to miss this gorgeous house when walking past it? We bet you wont, since its style is so attractive! The shape of the building is something that reminds us of a spaceship and inside the innovative interior grabs the attention and takes you to another world. 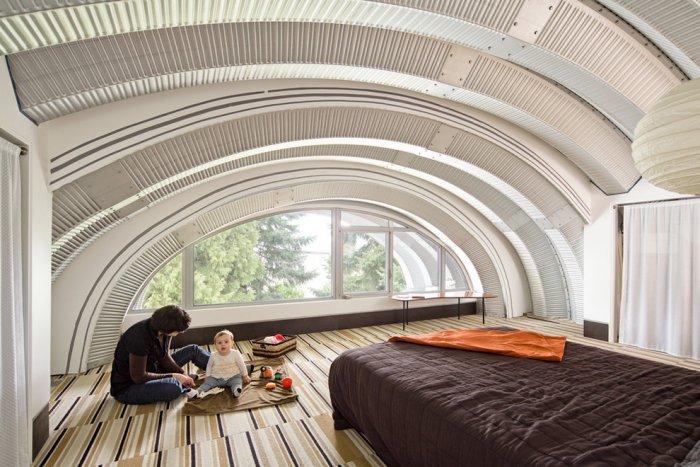 Actually, before this house has been transformed in this modern state on the same address the was an old Cape Cod home. The architect of the project is Edgar Papazian – the magician who transformed the landscape of the neighborhood. One of the main goals of Edgar was to increase the size of the living area. Of course, he wanted to do this in the most original way so that’s why he decided to make an interesting blend between old details and newly built elements so that at the end his work was simply astonishing. 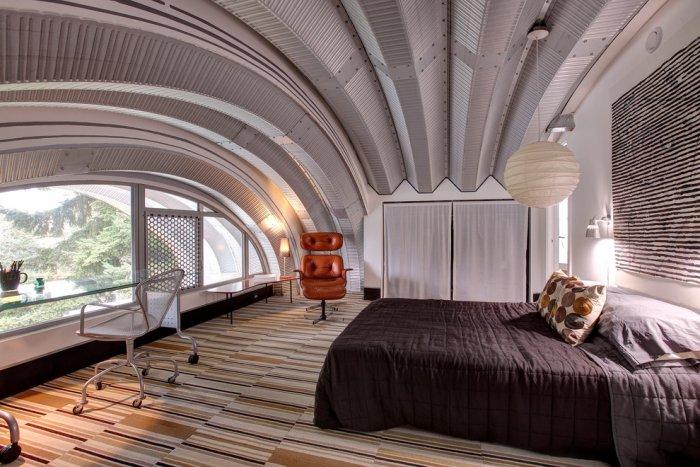 In fact, the interesting interior and memorable architecture of this house was the reason for shooting a scene from “Feminist Bookstore‘s 10th Anniversary” where an exotic durian fruit comes to life, taking off for its alien planet. Well, when you are at the back of the house, the sense of standing in front of a spaceship is the strongest. 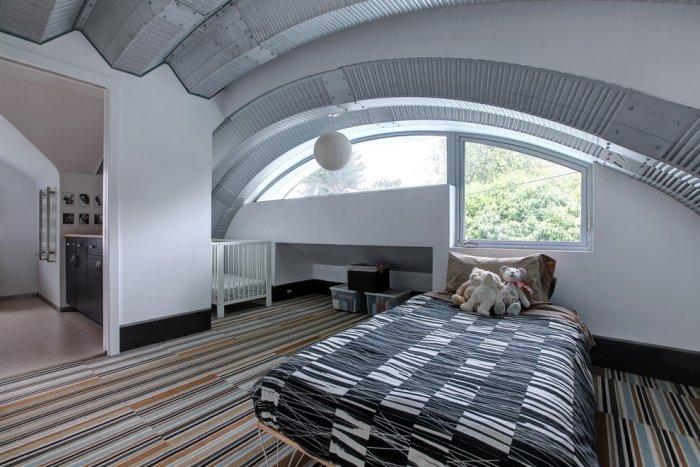 There is a continues consequence of the curves that are shaping the exterior and those used in the interior of the house. They create a modern feeling inside the home and add a stylish touch in it. 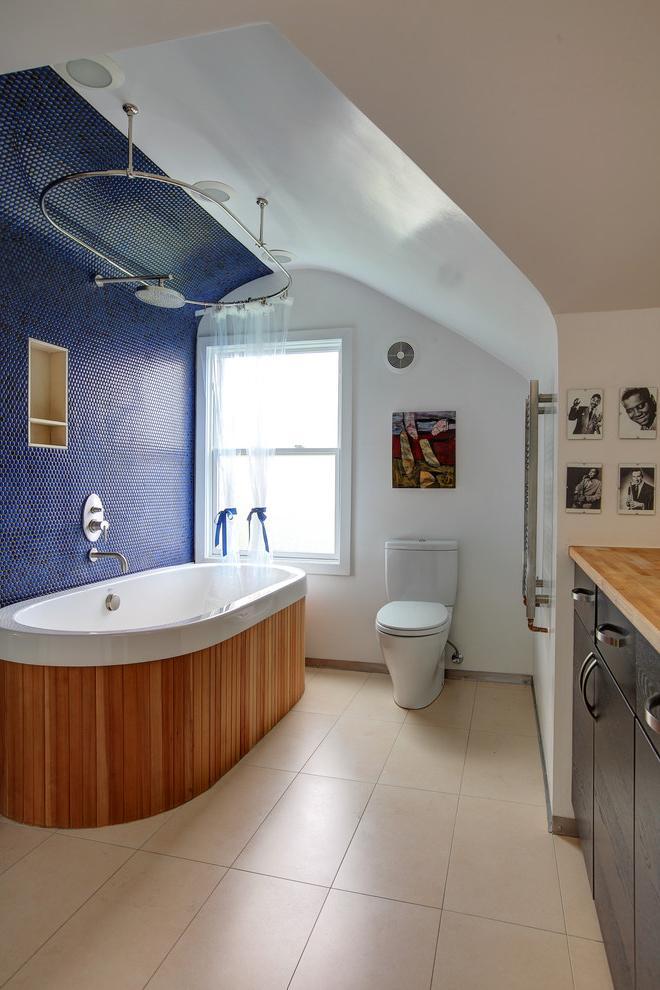 There is a very interesting feature on the second level that used to be an old attic before. Now, you will find there a single raised eyebrow – an interesting shape that is formed from the modern curves we have written about. And because the architect wanted to extend the living area he used steel galvanized arches since they are able to create more space and volume. One the roof, there is white asphalt that reduces the solar gain. 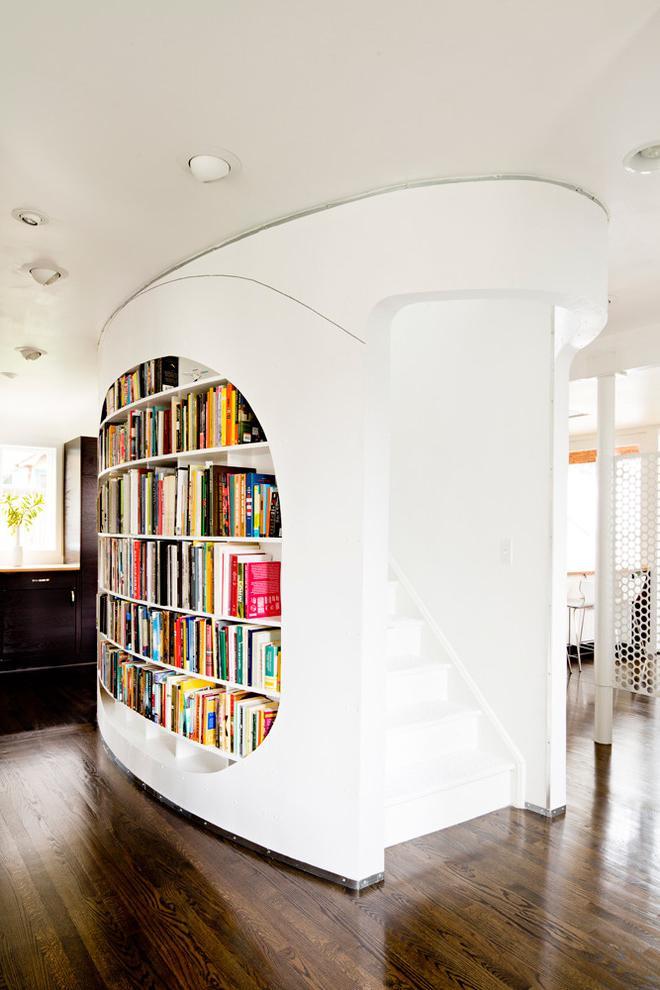 Modern oval bookcase of the house

In the bedrooms located on the second floor, the galvanized arches also take part of the interior.

There are also accents achieved by using steel arches that emphasize the spaceship atmosphere.

Several tricks and clever constructional decisions helped the architect to achieve the desired look. For example, the arched roof was easily insulated with purlins that Edgar bolted on top of the arches. Additionally he knew that there should be another layer that will prevent the warm air from inside flow away in winter. He placed soy-based foam insulation and thus he filled the cavity between the arches and roof.

An interesting part of the house is the daughter’s bedroom since it was constructed because of the expansion of the existing living area. Actually, these arched shape of the upper level of the house opened far more space than the property originally had. 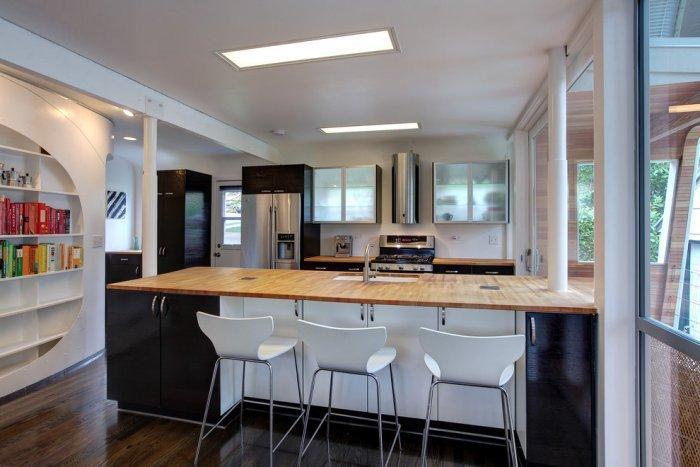 Going into the bathroom one can feel the curvy interior here as well as in the rest of the house. There is an interesting feature inside the bathroom and it’s the slope of the ceiling. An oval bathtub with massive wood foundation completes the elegant atmosphere in the interior. 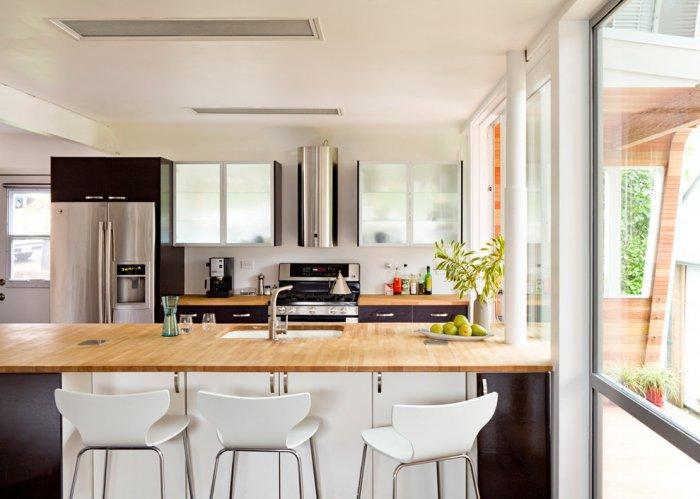 Heading downstairs one drops into the area where the main bookcase stands. It is an oval column with curved shapes with futuristic look. 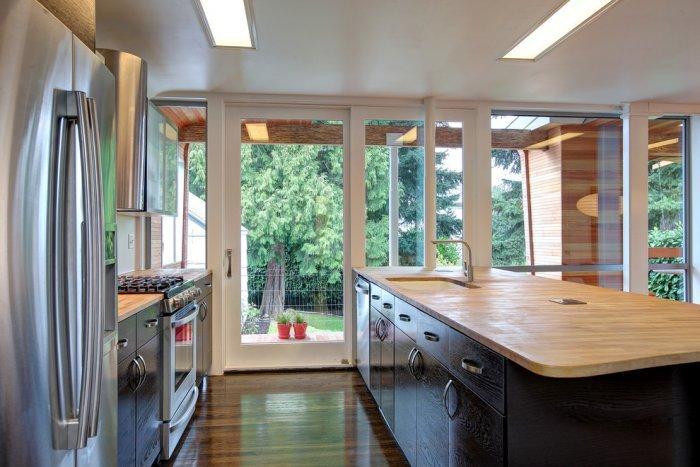 Originally the kitchen was placed in the front of the house. Now, Papazian chose to change its position and install it at the back of the building. Thus, he provided an outstanding view to the backyard when someone is cooking or washing the dishes. Functionally, the cooking area is more like a center of the household since the family spend the most of their time there. The actual cost of the kitchen is around 15 000$ – cabinets, countertops, shelvings, etc. Most of them are bought from IKEA – a definite guarantee for good quality, stylish look and low expense. 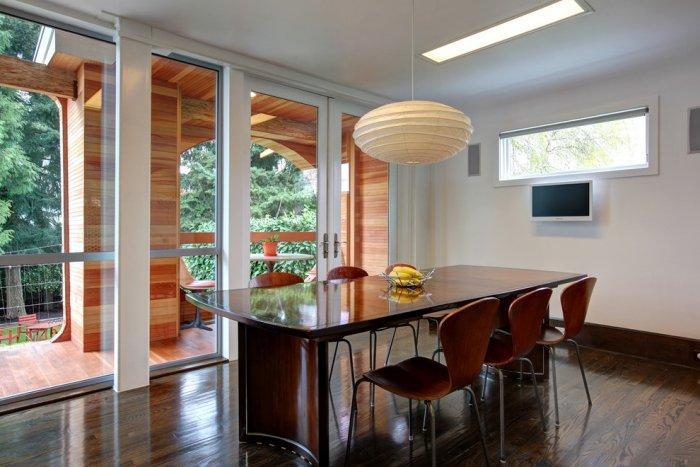 A grand kitchen island is formed by IKEA’s butcher block and base cabinets. Additionally, the architect added some curvy shapes so that the furniture blends naturally with the rest of the interior.

And now – heading to the dining room. It is attached to the kitchen and it also have a direct view to the outside parts of the house where fir and cedar trees live in perfect harmony with the rye-grass.

In the living room there wasn’t any fireplace when the architect met the original state of the property. And because he couldn’t imagine a life without this essential for a cozy interior element he firmly created one with a rounded mantel jut. The flooring is a classic execution of massive oak panels.

The exterior walls are probably the only element that Edgar left in almost their original state. Everything else has been reconstructed, changed or additionally created. A steel column bears the entire load of the newly built upstairs. 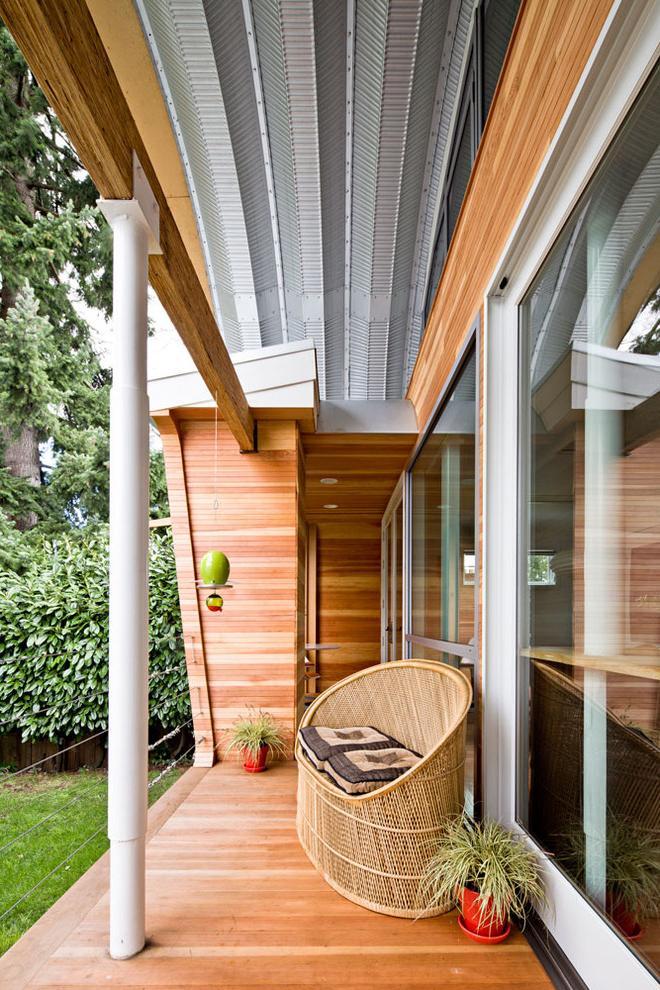 There aren’t many homes of this kind in Southeast Portland but despite the fact that such futuristic modern homes are something extraordinary, the architect succeed in implementing this innovative look into the rest of the neighborhood. 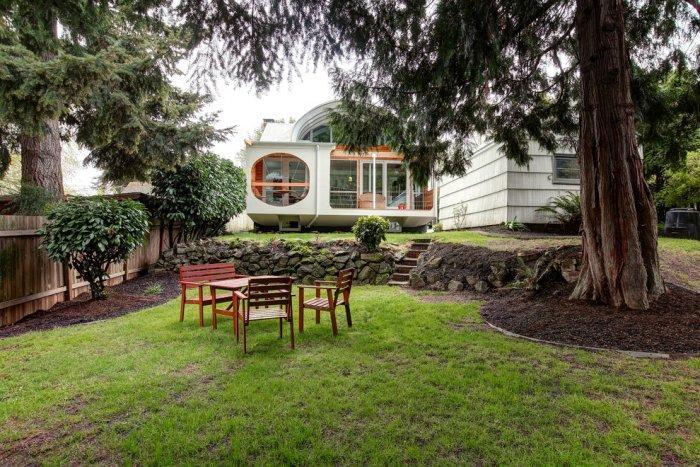 The backyard of the house and trees

And now, let’s have a look at Edgar Papazian’s presentation in Portland:
[youtube http://www.youtube.com/watch?v=18fOOjjjJcY]